The A7V Sturmpanzer-Kraftwagen was the only tank made by Germany, then the German Empire, during WWI.

100 of them were ordered, but only 25 were actually built. The German authorities at the time could not see the usefulness of the tank, and by the time they did realize it was already too late. 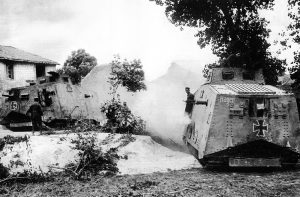 This tank was huge, more in line with a medieval siege engine than a modern battle tank, and was really just a huge steel box on the chassis of a tractor. Still, despite its massive size and weight, on level ground and could travel at twice the speed of a British Mark IV Heavy Tank.

The A7V had the largest crew of any tank with 18 men inside, 12 of them were there to fire weapons, in pairs. The main gun was positioned at the slightly pointed front, with machine-guns along the sides and at the back. 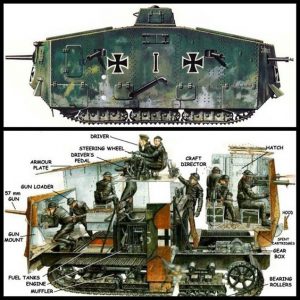 On the battlefield its maneuverability was poor to say the least. It trundled along like a cardboard box being carried by many men in a pantomime. However, on the road, it could reach speeds of 9 mph (14 kph), and was quite a frightening sight being such a beast of a machine. 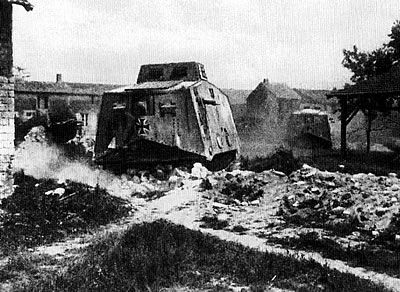 The A7V had its first battle on April 24 1918 when three of them faced three British tanks, two female and one male Mark IV (see last paragraph), at Villers Bretonneux. It was a very haphazard little battle because some of the British tank crews were suffering the effects of mustard gas from the previous day and, in fact, some of them had left their tanks already so they were short of crewmen. 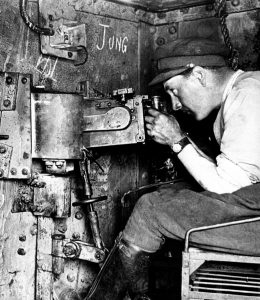 The lead A7V opened fire on the two female tanks, penetrating their armor and causing them to withdraw. Two of the three A7V’s were out of range for remaining British male tank so the commander, Second Lieutenant Frank Mitchell, held fast to give his gunner a better shot at the German tank. 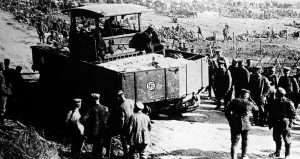 The British tank opened fire and the A7V toppled over, much to the delight of the British tank crew. However, the A7V had not been hit but rather it had simply driven, accidentally, down a steep ditch and fallen over. Still, this was recorded as the first tank on tank kill.