The Mark IV heavy tank was designed in October 1916 and produced between March and April 1917.

The first time the Mark IV saw action was at the Battle of Messines Ridge on June 7, 1917.

However, the Mark IV heavy tank is most famous for its performance at the Battle of Cambrai, which took place on November 20, 1917. Of the more than 400 tanks that took part in the battle, many were Mark IVs.

The silhouette of the Mark IV heavy tank can be found on the cap and arm badge of the UK’s Royal Tank Regiment, which observes November 20 as Regimental Day.

The Mark IV featured a number of improvements over the Mark III heavy tank.

The sponsons on the Mark IV had hinges so that the sponsons could be swung inward if the tank was transported by rail.  In earlier heavy tanks, the sponsons had to be removed for rail journeys.  The Mark IV’s sponsons were also reduced in size, so that their lower edges were further from the ground.

Of the 1,220 Mark IVs that were built, 205 were tank tenders. These were used for carrying supplies into battle. They had square sponsons that resembled boxes. The tank tenders had specially boosted Daimler engines that generated 125 horsepower. 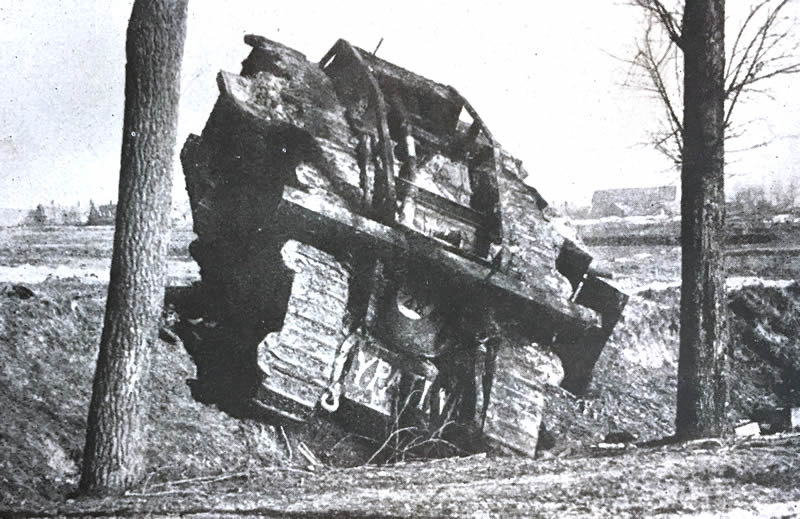 Twenty years later, the tank was restored to full working condition and assigned to a Royal Navy battalion that defended Portsmouth during World War II.   It was taken out of service after it damaged a private car.

From 1969 to 1971, 18 Command Workshop of the Royal Electrical and Mechanical Engineers (REME) at Bovington, in Dorset, worked on restoring Tank No. 3424 until it was fully operational once again. The tank now resides at the Tank Museum in Bovington.