The Mark V Heavy Tank was the first of the British heavy tanks to require only one driver. This was because it had a new four-speed epicyclic gearbox, which was designed by W.G. Wilson.

Other improvements included better ventilation and improved visibility for the crew. 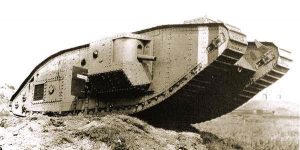 Some Mark Vs, as well as some Mark IVs, had tadpole tails fitted to them. The tadpole tail was a device that was attached to the rear of the tank and made the tank about 9 feet (2.74 meters) longer. It was designed to make it easier for the tank to cross trenches.  Unfortunately, tadpole tails were not rigid or laterally stable enough to be very effective.

In a version of the Mark V known as the Mark VA, 6 feet (1.83 meters) of armor were fitted between the sponson opening and the housing for the epicyclic gear. This was a better way to lengthen the tank so that it would be better at crossing trenches.  Adding the extra 6 feet of armor also created extra storage space in the tank – enough to carry as many 25 men.

The first battalion to receive the Mark V was the 8th Battalion Tank Corp, which was provided with Mark V Heavy Tank No. 9199 in July 1918.

On August 8, 1918, during the Battle of Amiens, Crew H41 of the 8th Battalion became the first men to see action in the Mark V.    Tank No. 9199 remained undamaged by the end of the battle.  Tank commander Lt. H.A. Whittenbury received a Military Cross for his service. 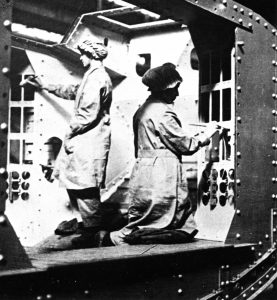 In September, Crew H41, which had a different commander by this time, led an infantry attack on the village of Estrees. Shellfire hit No. 9199 and then damaged the left track.

The tank was then used for training at Bovington, in Wareham, Dorset.  In 1921, it was given to the 4th Battalion, Tank Corps at Wogret Camp, near Wareham.

It was returned to Bovington in 1925.

The Driving and Maintenance School and the Camp Workshops used Tank No. 9199 for towing and recovery during World War II. 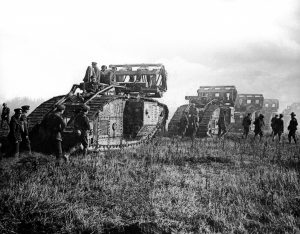 Although the Mark V was superior to earlier tanks, it did have flaws. It was hard to drive and often broke down. In addition, the crewmen inside the tank often suffered from carbon monoxide poisoning because of poor ventilation.