The LK I was a German light tank that was designed to be simple and easy to produce.

Its designer was Joseph Vollmer. Vollmer also had a hand in the creation of the A7V Sturmpanzer-Kraftwagen.

Designed in 1918, the LK I, or Leichte Kampfwagen I, had a layout like that of a typical car. It had the chassis of a Daimler car.  The car’s axles were used in the tank’s sprocket and idler wheels. 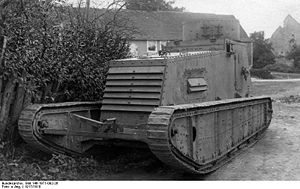 The Armistice took place before the LK I could see active service. Therefore, it only existed as a prototype.