T-54 and T-55 main battle tanks have been among the most widely used tanks in the world. The USSR supplied the North Vietnamese Army and the Viet Cong with T-54 and T-55 tanks during the Vietnam War. 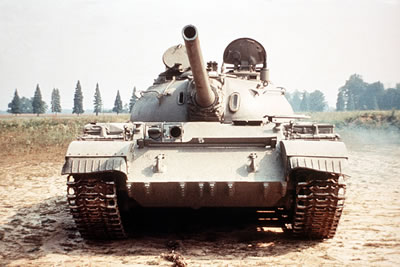 The hull is all-welded and the turret is cast iron.

The T-54 main battle tank has a torsion-bar type suspension, with five road wheels on each side of the tank. The drive sprocket is at the front and the idler is in the rear. The top of the track rests on the top of the road wheels, so there are no return rollers.

Four crewmen operate the T-54: a driver, a commander, a gunner and a loader.  The driver sits at the front of the hull, on the right side. The commander and the gunner sit in the left side of the turret, and the loader sits in the turret on the right.

The T-54 can lay a smoke screen by injecting diesel fuel into the exhaust outlet on the left of the hull.

In 1963, the T-55A appeared.  It had shielding to protect the tank from radiation.

Most versions of the T-54 and the T-55 main battle tank have infrared night vision equipment.

Many variants of the T-54/T-55 have been built.  These include command versions, bridgelayers, armored recovery vehicles, combat engineering vehicles, firefighters, mine clearers, flame throwers, self-propelled guns and an armored personnel carrier.

Versions T-55M and the T-55MV can each fire an AT-10 Stabber laser-guided anti-tank missile. The T-55MV has explosive reactive armor as well.

The Soviets used the T-54 main battle tank when they invaded Hungary in 1956.

Although the T54/T55 is not in service in Russia, it remains in service with many countries around the world. Some of these countries have developed their own variants.

Currently (early 2011), the T-55 main battle tank is being used by both Gadaffi’s forces and by rebel forces during the uprisings in Libya.

India used the T-55 during the 1971 war between India and Pakistan.

Yugoslavia and Macedonia used the T-55 during the War in Kosovo in the late 1990s and during the 2001 conflict in Macedonia.