The PT-76 light amphibious tank is a fully amphibious tank that was developed in the Soviet Union after the World War II. It has been used by countries all over the world.

During the Vietnam War, the North Vietnamese Army (NVA) used the PT-76.  It could easily travel through rice paddies and traverse bridges that were not sturdy enough for heavier tanks.

The PT-76 was involved in the only tank vs. tank battle between the NVA and the US Army during the Vietnam War – the Battle of Ben Het in 1969, when 10 North Vietnamese PT-76 light amphibious tanks faced several American M48 Patton tanks.

Long before World War II began, the Soviets had been building amphibious tanks. 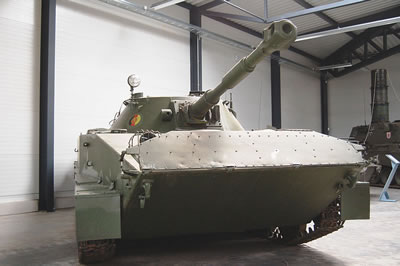 Two prototype amphibious tanks, the T-33 and T-41 were built, but these were not accepted for mass production.

The first Soviet amphibious tank to be accepted for service was the T-37. It entered service in 1933.

During World War II, dealing with anti-tank weapons became an issue.   When previous amphibious tanks had been designed, the focus was on keeping the tanks light so that they could float.  As the war progressed, the Soviets realized that they had to make tanks that could resist fire from anti-tank weapons. 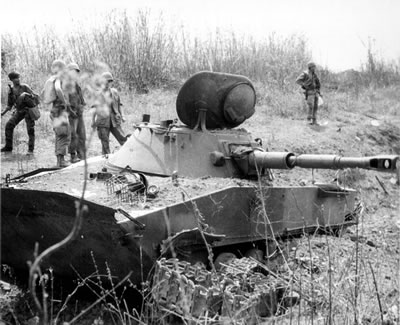 The Soviets built a new amphibious tank, the T-40, with a hull and chassis that were less vulnerable to anti-tank weapons. The T-40 entered service in 1941 and remained in service until 1946.

In 1950, the Soviets began production of the PT-76, a fully amphibious tank that was designed to be used for reconnaissance, for crossing water obstacles during an attack and for supporting artillery when a beachhead was being established.

The PT-76 is a fully amphibious tank. It can travel through water without special preparation.

Before the tank enters the water, a trim vane is erected in front of the tank. The driver’s center periscope is raised so he can see over the trim vane.

Bilge pumps are turned on so that the tank will remain afloat if it is hit.

The PT-76 was the first amphibious tank to use a hydrojet propulsion system to move it through water.

When the PT-76 is in water, the driver steers the tank in water by opening and closing covers over the vents.

An all-welded, flat, boat-shaped hull enables the PT-76 to move easily through water.

It uses a torsion bar suspension with six road wheels. There are no track return rollers. The idler is at the front and the drive sprocket is at the rear.

Maximum range on land is 230 miles (370km).  Auxiliary fuel tanks containing 180 liters of fuel can be installed on the rear decking of the tank, increasing the range to 298 miles (480km).

A crew of three – a driver, a commander and a gunner/loader – operates – the PT-76 light amphibious tank.

The driver sits in the front of the hull, and the commander and the gunner/loader sit in the turret.

The chassis of the PT-76 has been used as the basis for many other vehicles, including the BTR-50 armored personnel carrier, the ZSU-23-4 self-propelled anti-aircraft gun and the SA-6 Gainful anti-aircraft missile system.

The PT-76 light amphibious tank has been exported to many different countries. Although production ended in the late 1960s, the tank is still in service in various countries around the world, including Russia, Vietnam, Afghanistan and North Korea.

A modified version of the PT-76 was built in China and was called the Type 60.  The prototype of the Type 60 had many design flaws.  The Chinese redesigned the tank and renamed it the Type 63

Some Type 63s were used by the North Vietnamese Army during the Vietnam w#ar.

The PT-76 has been used in many other conflicts, as well.