The M551 Sheridan light tank was designed to replace the M41 light tank and the M56 self-propelled anti-tank gun, thus fulfilling both reconnaissance and anti-tank roles. The M551 was supposed to be an amphibious tank, like the Soviet PT-76 light tank, which had entered service in the 1950s. The Sheridan was also supposed to be air-deployable.

In 1960, the Allison division of General Motors received a contract to design a new Armored Reconnaissance Airborne Assault Vehicle (ARAAV).

The first prototype was finished in 1962. Eleven more prototypes followed. 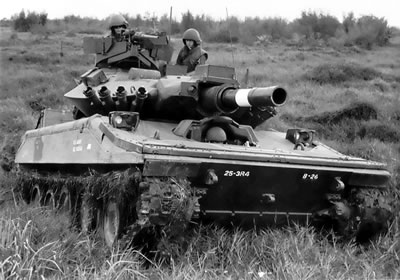 Allison was awarded a contract to produce this vehicle, now known as the M551 Sheridan, in 1965. The first Sheridans were built in 1966.

The problems weren’t fixed for another four years.

However, M551s were sent to Vietnam in 1968. Combat conditions during the Vietnam War exacerbated the tanks’ deficiencies.

Once the problems were fixed, M551s were issued to United States Army units in the United States, Korea and Germany.

The Sheridan has a torsion-bar type suspension. There are five road wheels. The idler is at the front and the drive sprocket is at the rear. The tank does not have track return rollers.

There are four smoke dischargers on either side of turret.

The main gun/missile launcher can fire conventional ammunition, including HEAT rounds, or a Shillelagh missile.

The Sheridan M551 has relatively thin armor, as it was designed to be light, amphibious and air deployable. The armor’s thinness made the M551 vulnerable to grenades and landmines in Vietnam.   The tank could even be damaged by heavy machine gun fire.

The Sheridan’s small size and light armor also meant that it had difficulty making its way through the dense Vietnamese jungle.

Recoil was also a problem, as the main gun was too big for the chassis. When the gun was fired, the whole tank recoiled.

A floatation screen was used to make the Sheridan amphibious.

A variant of the M551, the M551A1, was developed in 1971. It has a thermal sighting system and improved suspension.

The M551 Sheridan began to be phased out of US service in 1978. However, the 82nd Airborne Division continued to use them until 1996.