The M48 Patton medium tank was the most common United States tank to be used during the Vietnam War.

It was involved in the only tank vs. tank battle between the US Army and the North Vietnamese Army during the Vietnam War, the Battle of Ben Het in 1969, when several M48 Patton medium tanks fought 10 North Vietnamese PT-76 light amphibious tanks.

In October 1950, the Detroit Arsenal began designing a new medium tank with a 3.54 inch (90mm) gun.  In December of that year, Chrysler was given a contract to complete the design and build six prototypes. The first of these was to be built by December of the following year. 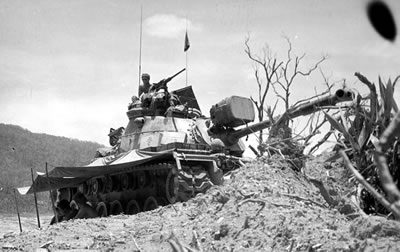 Ford and the Fisher Body Division of General Motors were given orders to begin producing this tank, which was known as the T48 when it was in development, in March 1951, before Chrysler had finished the first prototype. Production of the T48 began in 1952 and the tank, which eventually became known as the M48 Patton, entered service in 1953.

Later on, some M48s were also built by Alco products of Schenectady, New York and by Chrysler at its Delaware plant.

There are four crewmen. The driver sits at the front of the hull. The commander and gunner sit in the right side of the turret, while the loader sits in the turret on the left.

The M48 Patton medium tank uses a torsion-bar type suspension.  It has six road wheels. The idler is at the front and the drive sprocket is in the back. The number of road wheels ranges between three and five, depending on the model.

The engine and the transmission are located at the rear of the hull. A fireproof bulkhead separates them from the fighting compartment.

The M48A3 uses a diesel, rather than a gasoline, engine. This is the same diesel engine used by the M60A1 main battle tank. The M48A3 also has an upgraded fire control system and a modified commander’s cupola.

Other countries continued to use the M48.  Some of them created their own variants of this tank.

By the 1990s, the M48 was no longer in service with the United States. Currently, it is being used by Greece, Iran, Israel, Jordan, South Korea, Lebanon, Morocco, Pakistan, Thailand and Turkey.