The M41 Walker Bulldog light tank was built to replace the M24 Chaffee light tank, which was the standard light tank being used by the United States at the end of World War II. 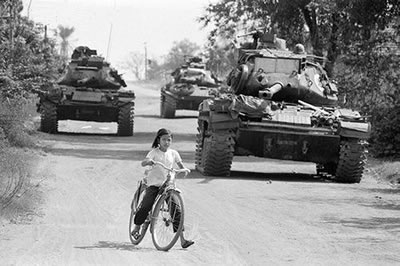 The M41 light tank was authorized for production in 1950 and entered service in 1951. Originally known as the Little Bulldog, it was renamed the Walker Bulldog in honor of General Walton Walker, who died in 1951, in a jeep accident in Korea.   It was built by the Cadillac Car Division of General Motors at the Cleveland Tank plant.

A new medium tank, the M47 and a new heavy tank, the M103, were designed at the same time as the M41 Walker Bulldog. All three of these tanks were supposed to share many of the same components.

The M41 uses a torsion-bar type suspension.  There are five road wheels and three return rollers. The idler is at the front of the tank and the drive sprocket is at the rear.

There is a four-man crew, consisting of a driver, commander, loader and gunner. The driver sits at the front of the hull, on the left side.  The commander and the gunner sit in the turret, on the right side. The loader sits in the left side of the turret.

A fireproof bulkhead in the Walker Bulldog separates the engine and the transmission, which are at the rear of the hull, from the fighting compartment. There is an escape hatch in the hull.

The M41 Walker Bulldog Light tank has infrared driving lights. Some models have an infrared search light, which can be used for detecting targets at night.

Variants of the M41 light tank include the M41A1, the M41A2 and the M41A3, which had slightly different gun control systems.  The M41A2’s and M41A3’s engines have fuel injection systems.

The United States Army has replaced the M41 Walker Bulldog light tank with the Sheridan M551 light tank. The M41 is still being used by the Brazilian, Chilean, Dominican, Guatemalan,   Taiwanese, Thai, and Uruguayan armies.