The A41 Centurion Mark 13 Main Battle Tank was built by the British at the end of World War II. It was used by the Australian Army during the Vietnam War.

The AEC Company in Middlesex began developing the Centurion Mark 13 main battle tank in 1944. Six prototypes were finished before World War II ended, but by the time they were shipped to Germany, there was no more need for them in combat.

Mass production of the A41 Centurion Mark 13, which was taken on by Vickers Limited at Keswick, Leyland Motors at Leyland and the Royal Ordnance Factory at Leeds, continued from 1945 to 1952.  Over 4400 Centurions were built. 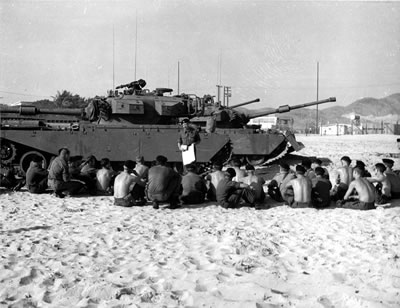 There are also three 0.3 inch (7.62 mm) machine guns, one is coaxial, one is in the commander’s cupola and one is a ranging machine gun.

The Centurion Mark 13 has smoke dischargers as well.

The engine and transmission are located at the rear of the hull, which is made of all welded steal.

The turret is made of cast armor.

Six road wheels are on each side of the tank. The drive sprocket is in the rear and the idler is in the front.  The Centurion uses a Horstmann-type suspension.

There have been 13 basic variants of the Centurion main battle tank.

At first, the Centurion was criticized for being very slow and not being able to travel very far. The earliest models had a range of only 65 miles (104 km).

Various changes were made to different variants of the Centurion MBT to allow it to carry more fuel so that it could go further. These including adding fuel drums to the back of the hull. However, these fuel drums could be damaged when the tank was traveling cross country. In addition, they were a fire hazard.

Eventually, variants that allowed the Centurion MBT to carry enough fuel for it to travel a distance of 118 miles (190 km) were built.

British forces used the Centurion during the Korean War.

The Centurion saw action during the 1956 Suez Crisis.

The Centurion has been by the British used against the IRA.