Tanks of Israel – From Independence Through the Yom Kippur War

Ever since the North African operations of World War II, desert terrain has proven to be ideal for tank warfare.

Therefore, it is no wonder that in the early decades of Israel’s existence, tanks played an increasingly important role in the many conflicts between Israel and its Arab neighbors.

When Israel first gained independence in 1948, neither Israel nor the Arab nations surrounding it had many tanks. The tanks that they did have were not very advanced.

These countries depended on surplus weapons from the major military powers.

The Arabs and the Israelis bought weapons from arms dealers, often with the former World War II combatants who originally owned the weapons looking the other way.

Tanks played a very small role in the 1948 Arab-Israeli War, also known as the Israeli War of Independence.

During the war, the Israeli tank force included a small number of Sherman, Cromwell and Churchill tanks, as well as some Hotchkiss H-35 and H-39 light tanks.

Egypt used Shermans, Crusaders and Matildas, as well as Mark V and M22 Locust light tanks.  They may have used some Valentines, as well.

As the Cold War progressed, the Israelis and the Arabs developed closer relations with the opposing superpowers and their allegiances became divided along those lines.

The Soviet bloc became the primary weapons supplier for the Arab countries.  At first, the Arabs relied on export versions of the T-54/55.  Later on, they used other tanks manufactured by the USSR and its allies.

In 1955, Egypt made an arms deal with the USSR and received T-34/85s and JS-3 (IS-3) tanks. During the 1956 Suez Crisis, it used these as well as M4 Shermans. Egypt also had a self-propelled version of the Valentine tank.

The British used Centurions tanks during the Suez Crises, while the French deployed AMX-13s.

Israel’s tank force included about 200 M4 Shermans and 100 AMX-13s. Israel had about 60 howitzers grafted on to AMX-13 chassis.

Although Israel now had better tanks than it had before, it had not yet developed a good tank strategy.

The Israeli military establishment had not yet agreed on how its tanks could be put to good use.

Tanks were relegated to an infantry support role.

When battle plans were created, not much thought was put into how tanks should be used or in coordinating the movements of tanks and infantry.  In one instance during the Suez Crisis, Israeli infantry forces were ordered to attack Egyptians at Umm Qataf without tank support, despite the objections of the Israeli commander on the scene.  This resulted in several Israeli half-tracks being destroyed, while the Egyptians were able to stand their ground.

The Six Day War was the first conflict in Israeli military history in which tanks played a major role.

More than 2,500 tanks were deployed during the Six Day War. There was frequent tank against tank combat.

The Israelis used their old AMX-13s and Super Shermans. They also had some M48 Pattons, which they had received from West Germany, and some old Centurions, which had been purchased from Great Britain.

Jordan had M48 Pattons, some of which were captured during the war and then used by the Israelis.

By the time of the 1967 Six Day War, Israel had come to understand the importance of effective tank strategy.

Israeli military leaders knew that tanks would play the most important role in ground operations.

Previously, Israeli tank strategy had focused on the use of light tanks – the idea being that tanks should be able to move quickly so that they could seek and destroy enemy forces.

By the time of the Six Day War, this strategy had changed.  Israeli high command now understood the importance of heavier tanks, such as Centurions and Pattons, which could carry better weapons and offered better protection for tank crews. 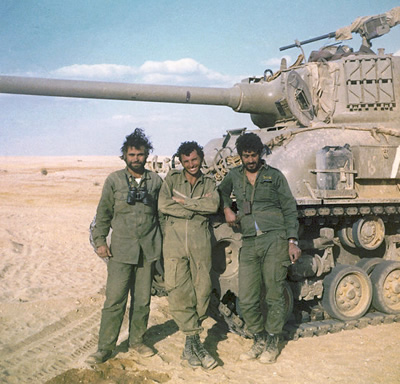 Tanks played an even more important role during the 1973 Yom Kippur War.

The Israelis had Super Shermans, modified Centurions, which were known as Sho’ts, and modified M48 and M60 Pattons, known as Magachs.

They also had some T-54/55s that had been captured during the Six Day War.

One of the greatest tank battles in history, the Battle of Golan Heights, took place during the Yom Kippur War, where a relatively small number of tankers managed to hold off an almost ovewhelming force wielding a much larger number of enemy tanks.