In the more than 30 years in which armed conflict has taken place in Afghanistan, tanks have not played a very strong role. The rocky, mountainous terrain that covers the Afghan countryside is not well suited for tank warfare.

However, the decades of conflict in Afghanistan have provided valuable lessons on the appropriate use of tanks in combat.

During the Cold War, third world countries tended to ally themselves with either the West of the East, hoping to receive money and military assistance from the United States or the USSR. 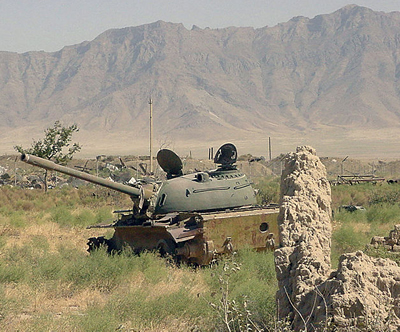 The Soviet Union supported emerging third world Communist governments and the US supported factions that opposed them.

In the 1950s, the government of Afghanistan developed a close relationship with the Soviet Union.

The Soviets helped Afghanistan prevent an insurrection by the Pashtun people, who lived in Afghanistan and neighboring Pakistan and wanted their own independent state, Pashtunistan.

In 1978, a Communist coup led to the overthrow of the Afghan government.

An Islamic guerrilla movement, whose members were known as Mujahideen, opposed the new Communist government. One of the Mujahideen leaders was Osama bin Laden.

Always fearful of the threat of Communism, the United States began supporting the Mujahideen, providing them with money, weapons and training.

The Soviet Union invaded Afghanistan, in support of the Communist government there, in December 1979.

However, they soon found that these tanks were practically useless in the Afghan mountain passes. Tank suffered hit and run attacks by guerrilla fighters, who had been provided with anti-tank weapons by the United States.

The Mujahideen often attacked cities, which meant that the Soviet tanks had to deal with urban combat – something for which these old tanks were not designed.

By the middle of 1980, an entire tank regiment had been recalled to the Soviet Union because it was deemed useless.

In February 1989, after more than nine years of fighting, the Soviet Union withdrew from Afghanistan. When the Soviets withdrew, they left tanks behind in Afghanistan. They can still be found, rusting, all over the Afghan countryside.

During the war, the People’s Republic of China supplied the Mujahideen with a small number of Type 59 main battle tanks.

War Against the Taliban

After the Soviets left Afghanistan, civil war continued to rage there. 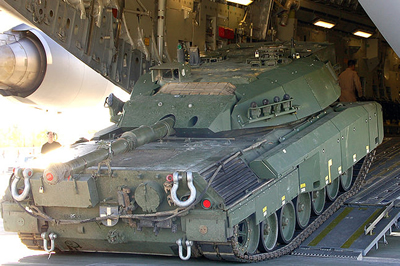 In August 1998, United States embassies in Kenya and Tanzania were bombed. The US pinned the blame on Osama bin Laden, who had recently founded an Islamic terrorist organization known as Al Qaeda and had forged an alliance between Al Qaeda and the Taliban.

Later that month, the US launched missile strikes against Afghanistan, claiming that it was targeting bin Laden’s bases.

When the World Trade Center and the Pentagon were attacked on September 11, 2001, the US government again blamed bin Laden.

The day before, Rabbani, who had been attempting to negotiate with the Taliban, had been killed by a suicide bomber.

In October 2001, United Nations forces, led by the US, commenced air strikes on Afghanistan, followed by a ground attack. The Northern Alliance, a coalition of Afghan groups that were opposed to the Taliban, joined forces with the UN.

Fighting has continued in Afghanistan until this day.

Throughout the war, tanks have not been used very much. They have often been deployed in urban areas.  The tanks of today are much better equipped to deal with urban combat than the tanks that were used in Afghanistan in the 1980s. In the mountains, tanks have been confined to roads and areas that have been cleared of mines and explosives.

As time has progressed, the Taliban have begun using more conventional infantry tactics instead of depending almost exclusively on guerrilla warfare, making the use of tanks by NATO countries more appropriate.

Canada sent 15 Leopard 1 tanks to Afghanistan in December 2006, in order to protect Canadian infantry who were fighting near Kandahar. The tanks were used against Taliban rocket fire. This was the first time since the Korean War that Canadian tanks had been used in combat.

The United States did not deploy tanks in Afghanistan (M1 Abrams) until early 2011.  In January of that year, tanks were sent to US Marines in Helmand province.