Tanks at the End of World War Two

A great rush of speed was undertaken after the allies had crossed the Rhine, striking swiftly into German territory with the lighter medium tanks of America and the cruiser tanks of Britain.

German tanks were still superior in quality by the last days or World War Two, and even put up fierce resistance in some places so that the allies were almost repulsed, but in the end it was the American factories that won out. Wave after wave of American-built tanks streamed off the production lines and found their way to Europe and the German Panzers were eventually overcome by sheer overwhelming numbers. 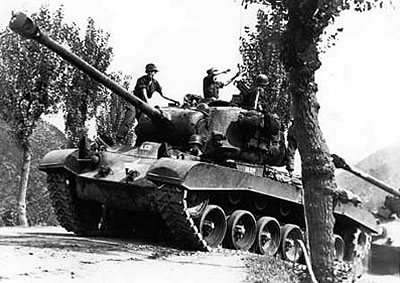 That isn’t to say that all allied tanks were useless on their own, nearing the end of the war there were some new tanks that were much more effective than their predecessors. The American Heavy Tank M26 Pershing , for instance, was a very well made machine with a 3.54inch (90mm) gun but prolonged delays meant that it didn’t see any action until right near the end of the war, though it did fight in both Europe and the Pacific before the war was over, and even fought in the Korean War afterwards. The highly commendable British Comet, Comet I (A34) cruiser tank, also came into service in the last stages of the war, and was one of the few tanks that was almost on par with German panzers of the time and could destroy them. The British also came up with a world class tank, the A41 Centurion, but this arrived too late, with the war already over by the time it was rushed to the front for testing. 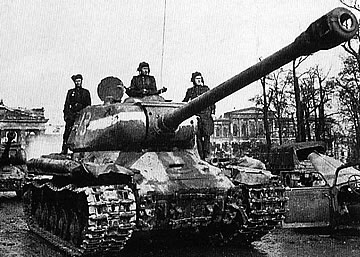 The Russians pressed ever onwards from the eastern Front with their excellent T-34 , JS-1, JS-2 and JS-3,  fitted with 4.8inch (122mm) guns and thick armor. The JS-3 had specially molded cast armor with smooth curves to deflect ordnance, but all of them were World War Two’s only main contender for the German Panzers.

Tank destroyers also rose to the top of their game by the end of WWII. In many countries, they were specially adapted, usually lighter and faster, tanks with large guns mounted on them that could take out enemy tanks. The large guns would often be fitted to smaller, lighter or practically obsolete chassis that were no use for anything else.

However, the Americans took a different tack and built up an arsenal of specially built high-speed, high-velocity guns whose only task was to destroy enemy tanks. From this came Tank Destroyer Command, whose motto was “Seek, Strike and Destroy”, and at its high point in 1943 was made up of 106 tank destroyer battalions. Their numbers did dwindle however because, it is thought, that the Germans did not present the allies with the masses of tanks they were expecting, due to using the bulk of their tanks against the Russians in the east. 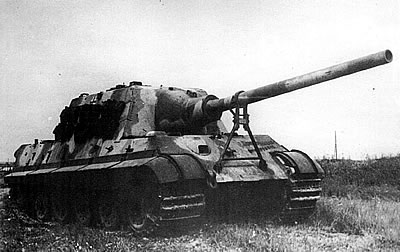 The British upgraded their M10’s by fitting a 17 pounder Mark V gun, calling it the “Achilles”, while the Germans created what is thought of as one of the best tank destroyers ever made, the Jagdpanther. They also made the Jagdtiger, the heaviest Armored Fighting Vehicle the Germans ever built that saw action.