Tanks During the Second Gulf War

At the end of the First Gulf War, in February 1991, Kuwait was liberated.

However, Saddam Hussein remained in power in Iraq.

In the spring of 2003, a coalition, led by the United State, invaded Iraq.  Its stated aims were to remove Saddam Hussein from power and to remove the threat of weapons of mass destruction that allegedly existed in Iraq.

This invasion, which lasted from March 19 to May 1, 2003, and the occupation of Iraq that followed it, made up the Second Gulf War, or the Second Persian Gulf War. (Some people consider this the Third Gulf War, the First Gulf War having been the Iran-Iraq War of the 1980s.)

In the United States, the Second Gulf War was called “Operation Iraqi Freedom”. 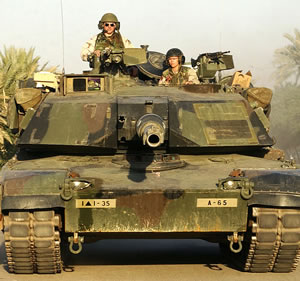 During the invasion of Iraq, the Coalition’s primary goal was to destroy Iraq’s fighting capability by destroying its headquarters and by eliminating its communications and logistics capabilities.

The First Gulf War had begun with a long bombardment by air.

This time, however, the Coalition set out to paralyze the Iraqi command structure with a sudden attack on both air and land.  Coalition forces crossed the Iraqi border within hours of an air attack.

The superiority of coalition tanks could clearly be seen during the 2003 invasion.

US forces had M1A1 and M1A2 Abrams main battle tanks.

The British had Challenger 2 MBTs.

The Iraqis relied on Soviet T-72Ms, as they had done during the First Gulf War. They had some other old tanks as well, including PT-76s (Soviet) and Type 69s (Chinese).

During the capture of Basra, British Challenger 2s destroyed 14 Iraqi tanks. This was the largest tank battle that the British had fought in 60 years.  One Challenger 2 was able to survive multiple hits from rocket-propelled grenades as well as a MILAN anti-tank missile.

In a battle on the outskirts of Baghdad, American M1A2s destroyed seven T-72s, with the American tanks suffering no losses at all.

Very few Abrams tanks were disabled during the invasion of Iraq. These were damaged by roadside bombs, mines and shoulder-fired anti-tank missiles fired by Fedayeen anti-tank squads.

No Challenger 2s were lost to the enemy at all.

The fall of Baghdad resulted in an Iraqi surrender and the overthrow of Saddam Hussein’s government.

Saddam Hussein was executed during the occupation.

Most of the Coalition’s losses in the Second Gulf War have taken place during this occupation.