Tanks During the First Gulf War

The First Gulf War, or First Persian Gulf War, which lasted from August 1990 to February 1991, was a reaction to the Iraqi invasion and annexation of Kuwait.  A coalition force, led by the United States, fought to liberate Kuwait.

In 1979, the Shah of Iran was deposed, leading to unrest in that country. 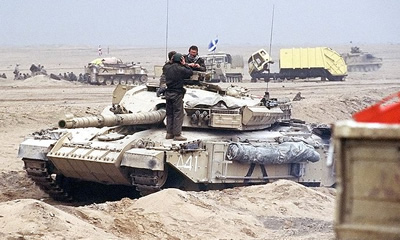 Saddam Hussein, the dictator of neighboring Iraq, took advantage of the situation by authorizing an invasion of Iran in 1980.

For the next eight years, war raged between Iraq and Iran.

During that time, Iraq continued to build up its armed forces.

By 1990, Iraq had the fourth largest army in the world.

On August 2, 1990, Iraqi troops invaded Kuwait. A UN-backed Coalition of 29 nations responded in an attempt to free Kuwait.

The United States was the leader of the Coalition, and its tank force was dominated by the M1A1 Abrams. Other important Coalition tanks during the war were Britain’s Challenger 1 and France’s AMX-30. There were also some American M60 Patton tanks and British Centurions.

Most of the Coalition countries used Western tanks; exceptions were Egypt and Syria, which had Soviet tanks.

On the opposing side, the majority of Iraqi tanks were T-72Ms that had been built in the Soviet Union, Czechoslovakia and Poland. The T-72M is an export version of the USSR’s T-72. 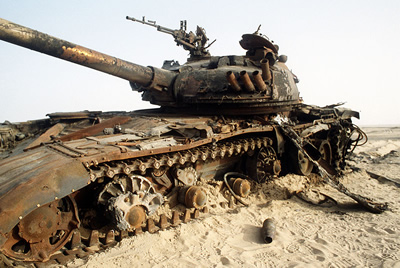 Coalition tanks were vastly superior to Iraqi tanks. The Iraqis used export versions of tanks and did not have access to the latest ammunition and the latest technological upgrades.

In addition to having inferior tanks, the Iraqi tank force was hampered by the fact that its crews were poorly trained compared to Coalition tank crews.

Iraqi battle tactics had been influenced heavily by the experience of the long war with Iran, where artillery had played an important role in defending against human wave attacks by the Iranians.  Therefore, the Iraqis were heavily dependent on artillery and had less experience with tank warfare.

The Iraqi tank crews often tried to make up for their lack of training by using their tanks for defense and fighting from dug-in positions, instead of using their tanks to fight aggressively.  They would presight their weapons to specific distances and then fire. Their efforts were very uncoordinated.

Coalition troops were able to use air attacks to destroy Iraqi tanks before the ground war even started. Aircraft with thermal target equipment would discover and blow up parked vehicles while Iraqi soldiers were sleeping in them.

On the other hand, Coalition tank crews were well organized and worked efficiently along with infantry and air support.

During the ground war, Coalition forces did not attack Iraqi tanks head on. Instead the spearhead broke through the Iraqis’ main defensive line, got behind it, and then moved in from the rear while other forces put pressure on the front.

Coalition tanks were able to advance so quickly that sometimes they arrived at enemy positions before the Iraqi troops even received warning of an attack.

As they broke through the front line, the unprepared Iraqi troops behind it were terrified and surrendered immediately.

The First Gulf War ended in February 1991, when the Iraqi army was defeated and Kuwait was liberated.

It is believed that only 18 Abrams tanks had to be taken out of service during the war, most of these because of friendly fire, and that no Challenger 1s were lost to enemy fire at all. Challenger 1s are believed to have destroyed 300 Iraqi tanks.

The record for the longest distance tank against tank kill goes to a Challenger 1 in the First Gulf War, which destroyed an Iraqi tank from a distance of 3.2 miles (5.1km).