Tanks During the First Chechen War

During the First Chechen War, which lasted from December 1994 to August 1996, the Russian Federation attempted to prevent the Republic of Chechnya from gaining independence.

Despite having superior military technology, the Russians were incapable of defeating the Chechens, who relied largely on guerrilla fighting tactics.

The First Chechen War demonstrated the need for tanks and tank crews to be capable of dealing with urban warfare and with guerrilla warfare. 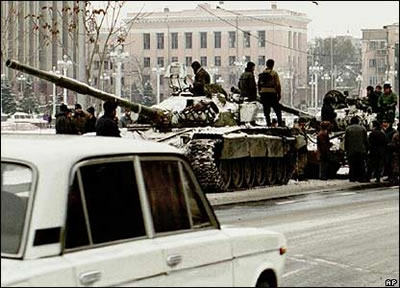 Chechnya was conquered by the Russian Empire in the nineteenth century.

After the Soviet Union was established, Chechnya became a republic of the USSR.

The Soviet Union fell in 1991. The Russian Federation, successor to the Soviet Union, then claimed Chechnya as part of Russia. Chechnya did not accept this.

In September 1991, during a coup led by the All National Congress of the Chechen People (NCChP), Vitaly Kutsenko was killed. Kutsenko had been head of the branch of the Communist party located in Grozny, the capital of Chechnya.

Dzhokar Dudayev, the leader of the NCChP, then became the leader of a new Chechen government, which declared itself independent from Russia.

Full independence was declared in 1993.

Russia did not recognize Chechnya’s independence.

A civil war took place in Chechnya between 1993 and 1994, with the Russian Federation providing military and financial support to Chechen groups that opposed Dudayev’s secessionist regime.

The Battle of Grozny

At the end of December, the Russians attacked Grozny. They began a campaign of aerial and artillery bombardment, accompanied by a ground invasion.

The Russians planned to invade Grozny from the east, north and northwest, and to escape from the south. Underestimating the capabilities of the Chechens, they left the southern route from the city open.

However, instead of attempting to escape, the Chechens fought back.

While the Russians had the advantages of a larger army and better weapons, the Chechens knew their city.  Russian soldiers, on the other hand, had to contend with out of date city maps.

The Chechens formed teams of 15 to 20 people, each of which were divided into fighting cells consisting of thee or four men.  Each cell would have an anti-tank gunner, a machine gunner and a sniper.

Chechen fighters would hide in buildings and pick off Russian tank crewmen who were sitting in tank cupolas, and Russian infantrymen, who rode the on tops of tanks instead of patrolling the streets.

The Chechens fought from basements and from the second and third floors of buildings, where Russian tank guns could not reach them.

Sometimes, five or six Chechen teams would attack one Russian tank at the same time.

Chechen rebels would fire at tank treads to immobilize the tanks and then blow the tanks up with the tank crews still inside them.

Many tank crewmen were killed while inside their tanks. Chechen rebels would hunt down and kill those who managed to escape.

The Russians then brought in more infantry, which moved through the city block by block, and began an intensive bombing campaign. This resulted in the devastation of Grozny.  Many civilians were killed and many others were displaced.  Many homes and public buildings, including hospitals, were destroyed.

Russian forces were able to destroy other large Chechen cities.

The Chechens were driven into the mountains by Russian firepower and air support, where they continued to maintained strongholds.

Russia was unable to gain control of large amounts of Chechen territory.

As casualties mounted, public opinion in Russia turned against the occupation.

Reports of human rights violations helped to sway public opinion.  Many international human rights organizations criticized Russia’s treatment of civilians during the First Chechen War, including the use of cluster bombs to attack Chechen villages.  Both sides held hostages and committed acts of torture.

A ceasefire was declared on 30 July 1995. This ceasefire provided for the withdrawal of most federal troops, the disarmament of rebel forces and an exchange of prisoners.

In the autumn of that year, there was an attempt on the life of General Anatoly Romany, who had commanded the federal forces in Chechnya.  Implementation of the ceasefire protocols, which had been progressing very slowly, came to a halt.

Dudayev was killed by a sheet fragment in April 1996.

On August 6, 1996, Chechen forces attacked Grozny.  With their superior knowledge of the city, they were able to avoid Russian checkpoints.  They attacked Russian tanks with mortars and sniper fire.

The Chechens surrounded the Grozny’s administrative center and its police stations, forcing Russian troops inside them to surrender.

Eventually, Grozny was retaken by the Chechens.

A peak e treaty was signed that month. The peace treaty called for all federal forces to be withdrawn from Chechnya by December 31, 1996.