Tanks During the Cold War

After World War II ended, an “Iron Curtain” across Europe divided the continent between Western and Soviet spheres of influence.

Political and ideological differences led to an enormous amount of mistrust between the two sides.

Both sides had large stockpiles of weapons that had been produced during the Second World War.

During the Cold War, there was never a full scale conflict between the USSR and the West.  Thus, it was a “cold war”, as opposed to a “hot war”.

However, there was a great deal of spying and political maneuvering.

The North Atlantic Treaty Organization (NATO), which was designed to protect the West from the Soviet Union, was formed in 1952. 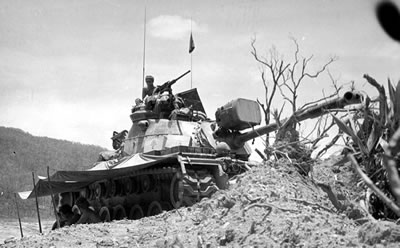 In 1955, the Soviet Union and its allies formed the Warsaw Pact to protect themselves from the West.

NBC (nuclear, biological, chemical) protection became an integral part of tanks on both sides of the Cold War.

The main battle tank came into existence during the Cold War as both Western and Communist tank designers realized that it was more efficient to build one tank that could be used in many different situations than to build different tanks for different functions – heavy tanks to support infantry and artillery, medium tanks to engage in battle with other tanks, and light tanks to be used for reconnaissance.

While there was never a true war between the West and the Soviet bloc there were proxy conflicts between countries that had formed alliances with either of the two sides.

In 1979, Soviet forces invaded Afghanistan to support the Communist government there against Muslim rebels, who were themselves supported by the United States and China.

The Soviets often supplied weapons to groups who claimed to be communist rebels.

Communist China received a large amount of military aid from the Soviet Union at the beginning of the Cold War. The Type 59 main battle tank, Communist China’s first tank, was based on the Soviet T-54 MBT. In the late 1960s, tensions between the USSR and China began to reassert themselves.

The nations of NATO were considered equal within the organization. They sometimes cooperated on joint military projects, but often each nation just designed and used whatever weapons it wanted, so that NATO military equipment ended up being very diverse.

In 1944, near the end of the World War II, America’s M26 Pershing heavy tank entered service.

Both the M26 Pershing and the M46 Patton were the main American tanks of the Korean War. The M46 Patton medium tank was the only tank to see battle in the Korean War, but in no other war. All other Korean War tanks were also used either in World War II or in Vietnam.

The M48 Patton was the primary American tank of the Vietnam War.  Various nations around the world still use it today.

The M41 Walker Bulldog light tank is still being used by a number of different armies around the world today.

The M103 heavy tank, which entered service in 1957, was the United States’ last heavy tank. It never saw combat, and was phased out of service beginning in 1972. 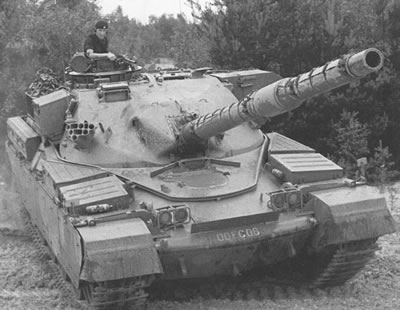 Because the British were worried that the Comet and Centurion would not be able to stand up to big Soviet tanks, they built the FV214 Conqueror heavy tank, which entered service in 1956.  The Conqueror was unreliable, hard to maintain and hard to maneuver.

It was used only in West Germany and was never engaged in combat. It was removed from service in 1966.

Britain’s FV4201 Chieftain main battle tank entered service in 1967. It is still used by some armies in the Middle East.

France was occupied by the Germans during World War II, so tank design had to take place in secret during the war.

The AMX-50 heavy tank never got past the prototype stage.  The French decided to use M47 Patton medium tanks from America instead.

France’s AMX-13 light tank entered service in 1953.  It was designed for transport by air.

The AMX-30 main battle tank started out as a collaborative project between France, Italy and West Germany to design a tank to be used by all of Europe. The project never got past the prototype stage, and France went on to develop its own tank, the AMX-30. The AMX-30 is still used by France and by other countries around the world.

When building their tanks, the West Germans focused on mobility rather than protection. 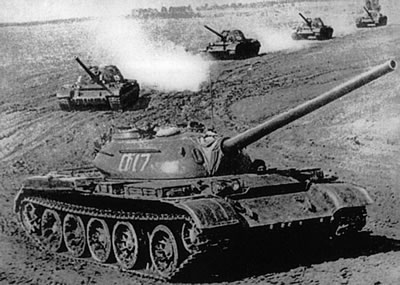 The Warsaw Pact was under the control of the Soviet Union, and most of its military equipment was standardized.

After World War II was over, the Soviet Union still had a large number of T-34/85 medium tanks.

An advanced version of the JS-2 heavy tank, the JS-3 also became available.

The T-54/T-55 main battle tank, which entered service in 1950, was supplied to Communist China.

During the Vietnam War, the USSR provided the Viet Cong and the North Vietnamese Army with T-54s and T-55s.

In 1952, the USSR’s PT-76 light amphibious tank entered service.  This tank was designed to be used for reconnaissance, to support a beach invasion, and to cross underwater obstacles during an assault.

It was used by the North Vietnamese Army during the Vietnam War, where it was useful for crossing rice paddies and travelling over bridges that could not support the weight of larger tanks.

The T-10 heavy tank, the last of the Soviet heavy tanks, first appeared in 1953. It was phased out of service when the Soviets realized that it was more efficient to focus resources on building and maintaining many main battle tanks instead of a few heavy tanks.

In 1973, the Soviet Union’s T-72 main battle tank entered service. Like the T-64, it had composite armor.  Inexpensive to mass produce, the T-72 was designed to be exported to other Warsaw Pact countries.

The T-72 main battle tank has been exported to many countries worldwide, and is still in use in Russia and in other countries.

The T-80 main battle tank, which entered service in 1976, was the first Soviet tank with a laser rangefinder and a ballistic computer. Like the T-72, it is also still being used in Russia and elsewhere.