Tanks During and After the Breakup of Yugoslavia

After World War II, Yugoslavia was created as a communist state. It was part of the Soviet bloc.

The nation consisted of many different religious and ethnic groups, held together by their alliance with the Soviet Union.

After the USSR collapsed, religious and ethnic rivalries came to the fore, resulting in many conflicts, and ultimately, a complete breakup of the country.

Tank warfare in the former Yugoslavia has been characterized by the use of both very old and very new tanks.  The Yugoslav army and rebel armies had very old Soviet and American tanks, including some that had been around during World War II. 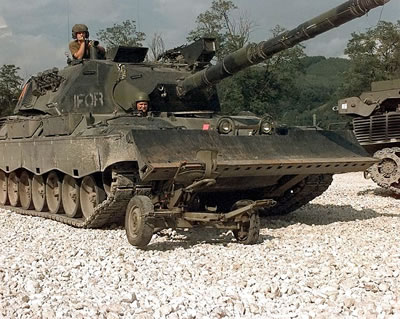 Intervening NATO countries, however, introduced modern tanks, such as the M1 Abrams, the Challenger and the Leopard, to the region.

From June 26 to July 6, a brief conflict, known as the Ten Day War, or the War for Slovenian Independence, took place between the Yugoslav People’s Army and Slovenia.

The tank force of the Yugoslav People’s Army consisted mainly of Soviet T-54/T-55 tanks, as well as M-84s. The M-84 is a variant of the Soviet T-72 that was produced under license in Yugoslavia. The Yugoslav Army also had old Soviet T-34s and PT-76s, and old American M4 Sherman and M47 Patton tanks.

The Slovenians did not have many tanks of their own. However, they were able to use landmines, anti-tank weapons and improvised explosives against the Yugoslav tanks.

On July 7, Yugoslavia, Slovenia and Croatia signed an agreement known as the Brioni Accord. This agreement called for a three-month ceasefire while negotiations for independence took place.

By the end of the Ten Day War, the Slovenians had managed to destroy about 20 Yugoslav tanks and capture more than 40.

At the end of the war, the armed forces of Slovenia took control of all Yugoslav military equipment within Slovenian territory.

Croatia fought its own War of Independence from March 1991 to November 1995.

From August 25 to November 18, 1991, during the Battle of Vukovar, the Yugoslav Army besieged the Croatian city of Vukovar with T-55 and M-84 tanks.

However, these tanks were not very effective in urban conditions, and Yugoslav forces had difficulty defending tanks from anti-tank missiles and landmines.

The Croatians had some M47 Patton tanks.

From September to December 1991, The Croats executed a series of offensive actions that became known as The Battle of the Barracks.

They were able to capture a large amount of Yugoslav weapons, including more than 70 T-55 tanks.

In November 1995 the Erdut Agreement, was signed. This agreement put the eastern part of Croatia under the control of the United Nations. 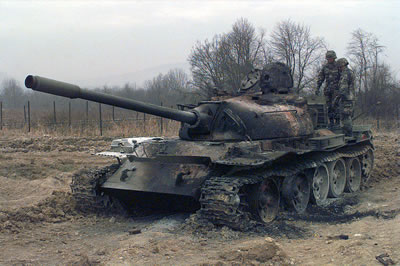 The Yugoslav Republic of Bosnia-Herzegovina declared its independence on March 3, 1992.

The Serbs, who wanted an “ethnically pure” Serb republic, took part in acts of genocide.

The United Nations was criticized for not doing enough to stop human rights violations.

The Bosnian War ended on December 14, 1995, with the signing of the Dayton Peace Accords. The Accords divided Bosnia into two separate zones, one for Serbs and one for Croats and Bosnian Muslims.

A NATO peacekeeping force was then sent to Bosnia. NATO forces remained in Bosnia until 2004

NATO tanks that have been use in Bosnia include the M1 Abrams (American ), the Leopard 1 (German), the  Challenger 1 and the Challenger 2 (British).

In 1970s, Kosovo was declared an autonomous province of Serbia.

Kosovo had a large number of ethnic Albanians, who were persecuted by Serbs under the leadership of Serbian president Slobodan Milosevic.

In March 1999, NATO began an air campaign against Kosovo, Serbia and Montenegro, in retaliation for human rights violations.

Milosevic was indicted for genocide and crimes against humanity in May 1999. He died in 2006, before his trial ended.

A NATO peacekeeping force entered Kosovo in June of 1999.

NATO tanks used in Kosovo have included the M1 Abrams, the Leopard 1 (used by Danish forces), the Leopard 2, the Challenger 2, and the Leclerc (French).