The conflict in Syria took seed during the Arab Spring of 2010-2012 and is still ongoing as of the end of 2017. It began in March 2011, with protests against Syrian President Bashar al-Assad’s Ba’athist government. Protesters were demanding an end to a state of emergency that had been in place since 1963. They were met with violent attacks from Syrian security forces.

In April, the Syrian Arab Army (SAA) placed the city of Daraa under siege for 11 days, with tanks surrounding the city and patrolling the streets. That same month, the city of Douma was blockaded for several days.  The SAA continued carrying out attacks throughout the country in May and June, with many more cities falling under siege.

In response, the Free Syrian Army (FSA) was formed in July 2011 and launched an armed rebellion against the Assad government. Foreign observers concluded that the conflict had evolved into a civil war. The Syrian National Council (SNC), a coalition of anti-government groups that was based in Turkey, formed in August.

Fighting continued to escalate, and in June 2012, the UN officially announced that Syria was in a state of civil war. 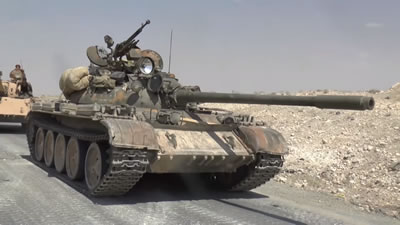 Over time, many different groups have become involved in the war. Hezbollah has taken the side of the SAA, which is also being supported by Russia and Iran.  The Muslim Brotherhood took the opposition’s side from the early days of the conflict. The opposition also includes other Islamist group and is supported by Turkey, Qatar, Saudi Arabia, Jordan, France, the US and the UK.

Later, some Islamist opposition groups, including ISIS, splintered off form the opposition form their own faction in support of a fundamentalist Islamic government based on their interpretation of Sharia law.

The SAA uses Russian tanks; the Soviet Union began supplying Syria with tanks in the 1950s, during the Cold War.  Tanks used by the SAA during the Civil War include Russian T-55, T-62, T-72 and T-90 main battle tanks.
The first use of tanks during the conflict took place during the raid on Daraa in April 2011. Since then, the SAA has used tanks in raids and sieges throughout the country.

Tanks are particularly useful for urban combat, and have helped Assad’s forces to move past buses, trucks and earth that the opposition have used as roadblocks. However, historically, the SAA has used its tanks for static defense – letting them stand in one spot and fire on oncoming attackers. Tank crews have little experience with maneuvering these heavy vehicles or with working jointly with infantry.

Consequently, it has not been very hard for opposition fighters to use light equipment to isolate SAA tanks and either destroy them or capture them for their own use.