While America’s M1 Abrams main battle tank has been around since the 1980s, it is still being used in combat today.

Iraq, Isis and the Kurds

The Abrams functions as Iraq’s main battle tank. Between 2010 and 2012, the Unite States supplied Iraq with 140 refurbished M1A1s.  Unfortunately, because the frontal arcs on the refurbished Abrams are not protected by depleted uranium, they have been vulnerable to attack, and many have been captured or destroyed by Isis, which has a stock of anti-tank weapons. In response to a request from Iraq for 175 full track M1A1 Abrams tanks with upgraded guns as well as other additional military supplies, in December 2-14, the US State Department approved the sale of an estimated $2.4 billion worth of M1A1 Abrams tanks and associated equipment, parts and logistical support.  Ostensibly, this is to aid Iraq in the fight against Isis. Iraqi forces used M1A1 tanks when they took retook Kirkuk from the Kurds in October 2017.

The M1A1 Abrams was used by coalition forces during the First Gulf War for the liberation of Kuwait from Iraq, which took place between 1990 and 1991. Between 1994 and 1997, Kuwait received 218 M1A2s from the US.  Kuwait requested upgrades to these MBTs in December 2016. However, in October 2017, the US State Department reported that Kuwait had decided to acquire brand new M1A2 Abrams tanks instead. 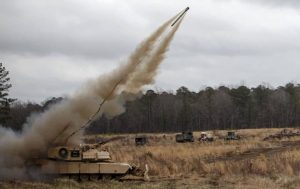 The M1A2S is a variant of the M1 upgraded for use in Saudi Arabia.  General Dynamics Land Systems was awarded a contract to design the M1A2S in November 2008. An additional contract was awarded in 2011. In August 2016, The US State Department approved a sale of up to 153 M1 and M1A2 Abrams, to Saudi Arabia. 133 of these are to be converted to M1A2s. The rest of these are to replace damaged tanks, believed to have been lost in Yemen, where the Saudi military has been fighting Houthi separatists since 2015. US President Donald Trump and King Salman of Saudi Arabia signed a defense deal which refers to this sale in May 2017.

The US is upgrading its M1A2 SEPv2 Abrams battle tanks with Israel’s trophy active protection system so they will be better able to defend themselves against threats when they are deployed in Europe in 2020.