The Islamic State (IS), alternatively known as:

is a quasi-state that bases its practices on fundamentalist Sunni Islam.

While it engages in terrorism, it has characteristics associated with states, included territory and a population that it taxes. More than 8 million Iraqis and Syrians live in the areas it controls.

ISIS does not produce its own tanks. All of its tanks were captured from Middle Eastern forces that it was warring with, notably those of Iraq and Syria. These tanks include the American M1 Abrams, Soviet T-55s, T-62s and T-72s, and some German Leopard 2s captured from Turkish forces in Syria. 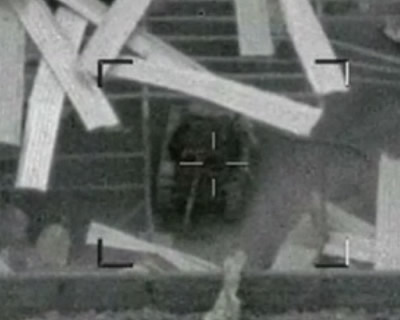 ISIS has made numerous modifications to its captured tanks, often with a DIY aspect. For example, it has used sandbags to increase armor protection and installed spent shell casings around turrets for support. ISIS even seems to have used foam as additional armor protection for a T-62. It has a unique approach to camouflage, covering tanks with leather strips to hide crew from infrared sensors.