The Battle of Arras, in 1940, was the first effective Allied counterattack against German forces in World War II. It was part of the Battle of France, in which the Nazis invaded France, Germany, Belgium, the Netherlands and Luxembourg.

The German panzer divisions were able to cross the Meuse River quickly and easily, catching many of the French forces by surprise.

Although the panzers could not do much damage to the heavy French Char 1s, the Germans were able to beat the French simply by being more organized and having a more up-to-date battle plan. 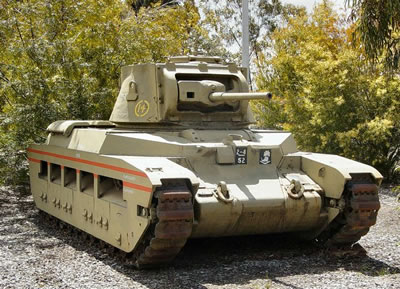 The French were still using World War I tactics. The French strategy was for forces to remain in static positions along the borders and for infantry, supported by tanks, to be used to drive back enemy assaults.

By this time, however, the Germans had learned that using up a great deal of resources in order to defeat one enemy stronghold was unproductive. Therefore, they moved their tanks quickly, passing areas where the French were strong and attacking from unexpected directions.

The Nazis also learned how to exploit the Char 1’s flaws. For example, they discovered that they could immobilize the French tanks by shooting their tracks and radiator louvers.

The Char 1’s hull-mounted gun could only fire forwards, so German tanks could avoid the gun by approaching the Char from the side.  The turret gun could still be used against the panzers.  However, the turret gun was operated by the tank commander, who also had to perform other tasks.  This reduced his effectiveness as a gunner.

The Germans were able to advance through France at a speed of 50 miles (80 kilometers) a day.

When they were about 50 miles (80 kilometers) from the English Channel, the Nazis encountered the British Expeditionary Force (BEF). General Erwin Rommel, commander of the German 7th Armored Division, decided to attack the British at Arras.

Two British infantry divisions could not stop the German advance. The Germans were able to surround Arras, separating the British from their lines of communication.

The German high command then ordered their forces to halt.

On May 22, 1940, the Germans received orders to advance on Arras once more.

However, more British tanks had arrived at Arras on May 21. There were now two British tank regiments, supported by two Territorial Infantry battalions, trying to prevent the Germans from overrunning British headquarters.

The British launched a counterattack against the Germans, using 76 Mark I and Mark II infantry tanks (Matildas). There 58 Mark Is and 16 Mark IIs.  Although the Mark IIs had 2 pounder guns, the Mark Is, which made up the majority of the British tanks, had only machine guns as weapons.

Because the British infantry were worn out by this time, British tanks at first moved forward without infantry support.  The infantry caught up with the tanks later.

The British caught the Nazis by surprise, just one hour before the German attack on Arras had been scheduled to begin.  British tanks were used to attack the 7th Armored Division and the SS Totenkopf (Death’s Head) Division.  The Totenkopf division retreated in panic.

German antitank gunners tried firing at the Matildas, but their rounds bounced of the British tanks.

The Matildas – even those that had only machine guns – were very effective against German anti-tank gunners.

Interestingly, a flaw in the Matildas’ design helped the British forces.

The Matildas’ external stowage bins, which held the tank crew’s extra gear, had a tendency to catch fire when they were shot at.  This did not affect the crew’s ability to drive the tank.

From a distance, it looked like the whole tank was on fire. German soldiers were terrified when they saw British tanks being driven while they were apparently engulfed in flames – making the British tanks, and the British tank crews, seem indestructible.

Rommel tried to help the German situation by personally directing field artillery crews and anti-aircraft gun crews.  He ran among the crews, ordering them to fire at British tanks.

Eventually, the British counterattack was stopped. However, by this time the 7th Armored Division was no longer in any condition to continue their attack on Arras.

German high command, who were now very worried about the possibility of losing any more of their valuable tanks, ordered another halt to the attack.

The Germans did not resume operations until May 26, 1940. By that time, the BEF had developed firm positions around Dunkirk.