The world’s first tank vs. tank battle took place during the Second Battle of Villers-Bretonneux, which lasted from April 24 to April 27, 1918.

On April 24, 1918, German troops were attempting to force Allied troops out of the French village of Villers-Bretonneux, on their way to Amiens.  This time, the Germans had tanks of their own – some A7V Sturmpanzer-Kraftwagens and some Mark IVs that had been captured from the British.

The German tanks had been able to break through the Allied line in several places. The Germans had been shelling the village and using poison gas. 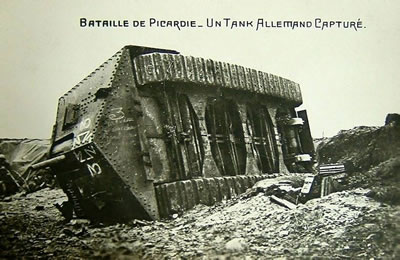 As the situation for the Allies worsened, three British Mark IVs moved in.  By this time, some of the tanks’ crewmembers had already been disabled by gas.

The three Mark IVs consisted of one male tank, which had two six pounder guns, and two female tanks, which only had machine guns.

The British tanks came upon a German A7V. The two female tanks approached the A7V first. They fired at the German tank, but their machine guns had no serious effect on it.  The A7V was able to put the female tanks out of action.

The male Mark IV hit the A7V with ammunition from one of its six pounders, but it wasn’t able to disable the German tank.  However, the activity caused the bulky A7V to move onto a steep bank and tip itself over. Thus, it disabled itself.

Two more A7Vs joined in, and  both sides exchanged fire. Eventually, the crew of one A7V left their tank and ran away. The other A7V  retreated.