World War I – Battle of Flers-Courcelette

The Allies were under a great deal of pressure from German forces at Verdun, in France. Allied forces decided to launch an offensive attack along the Somme River.

After a while, the Allies realized that they were not getting anywhere, so they decided to try using British tanks.

On September 15, 1916, British, New Zealand and Canadian troops attacked the Germans at Flers-Courcelette on the Somme.  This was the world’s first military assault in which tanks were used.

The operation was extremely hurried.  At that time, tanks were considered part of the infantry, but infantrymen and tank crews had not been taught how to work together. The tank crews themselves had very little training on how to operate the tanks. Nobody knew how to coordinate the movements of different tanks within a battle. 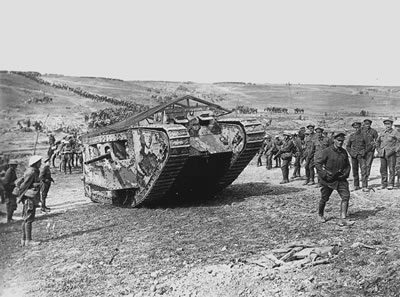 Originally, 60 British Mark I tanks were supposed to be used in the offensive. However, only 49 were built on time. When it was time for operations to start, only 36 were working properly

Eventually, only 9 tanks remained in fighting condition. The rest either became stuck in mud or behind obstacles, broke down or had so many mechanical problems that the infantry just left them behind.

The tank crews themselves suffered. It was very hot inside the tanks. The crews had to deal with engine fumes and with pieces of hot armor that flew around the inside of the tanks after the tanks were hit by enemy bullets. (The crewmen were given visors made of chainmail to protect them from hot splinters of metal but they found the visors uncomfortable so they rarely wore them.) They also couldn’t see where they were going.

Tank D1, which received a shell hit on the sponson, became the first tank to become seriously damaged in a battle.

By the next day, September 16, only three tanks, which were led by a division of British infantry and a division of New Zealand infantry, were left to engage in combat.

Despite all of the tanks’ problems and the difficulties endured by the tank crews, these three tanks proved to be very successful – because they terrified German soldiers. When German infantrymen saw the tanks, they ran away.  Sometimes, they ran away even before the tanks were close enough for the British tank crews to shoot at them.

As a result of the successes with tanks at Flers-Courcelette, the British War Office decided to order more tanks and to expand Britain’s tank force.

Nevertheless, the Allies suffered very heavy losses and the attack on Flers-Courcelette was called off on September 22.