World War I – Battle of Cambrai

The Battle of Cambrai was the first battle in which tanks were deployed en masse in a significant strategic role.

A plan to capture St Quentin was also rejected.

Eventually, a British campaign to take Cambrai was approved.  Unlike the area around Ypres, which was swampland, Cambrai was covered in open land that tanks could easily get through. 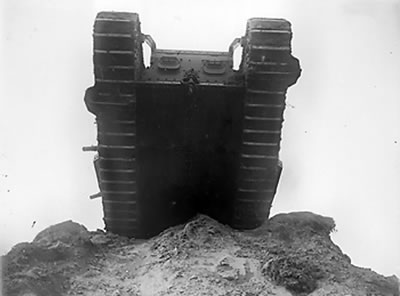 The British planned to use tanks to create a hole in enemy lines between two canals that lay on either side of Cambrai. The cavalry would then rush through the holes until they reached the enemy’s rear lines.

The attack on Cambrai, in which more than 400 tanks were deployed, began in November 1917.

The British forces encountered many difficulties.

Enemy soldiers positioned themselves on reverse slopes (the opposite sides of ridges or hills), so that it was difficult to get to them.

At this time, the Germans had set up a system of three rows of trenches – a front line trench, or fire trench; a support trench and a reserve trench

These trenches were too wide for the British tanks to cross unaided.

Barbed wire surrounded the trenches.  Although tanks could break through the wires, infantry soldiers could not.

So that the tanks could cross the trenches, it was decided that a fascine that was made up of 75 bundles of brushwood tied together with chains would be placed on top of each tank. These fascines would be dropped into the trenches, and the tanks would then cross on top of the fascines.

Grapnels, which were designed to pull away wires, were fitted on 32 tanks.

Sledges for carrying supplies were fitted to other tanks.

The second tank would drop a fascine into the trench and then cross over the front trench, on top of the fascine. It would then turn left, firing as it moved along the back of the fire trench.

Finally, the first tank would cross over the two fascines, cross the fire trench and support trench, and then use its own fascine to cross the reserve trench.

The second and third tanks were each followed by an infantry platoon.

The whole plan was so secretive that many of the infantry units did not even realize that there were tanks with them.

The tanks began moving forward, under cover of smoke, on November 17. They fell under attack by German artillery for a short time, but were soon able to continue moving forward.

On November 20, the British tanks finally broke through to the German rear lines and the German high command made plans to withdraw.

However, the British hadn’t planned things that far in advance. Now that they had gotten through to the German lines, they didn’t have a reserve infantry or tank force to continue the campaign.  The British cavalry was too far away and too slow to respond quickly enough.

The Germans resumed their attack on November 30.

Some tanks that were being dismantled so that they could be put on trains were put back together and sent back into action.

By that time, however, it was too late for the British, and they eventually retreated. The Battle of Cambrai ended on December 17, with the Germans recapturing most of their territory.