World War I – Battle of Arras

The second time that tanks were used in a large-scale military action was at the Battle of Arras, which started on April 9, 1917 and ended on May 16, 1917.

During the Battle of Arras, the Allies tried to use tanks and infantry to break through enemy lines, creating holes for the cavalry to charge through.

By this time, however, the Germans expected the Allies to use tanks, and they didn’t simply run away from them. 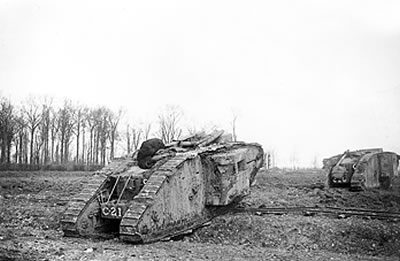 German soldiers used artillery fire to tear up the ground so that the tanks couldn’t get through.  In addition, the German infantry now had ammunition that could pierce tank armor.

Instead of being huge, frightening beasts to the Germans, the tanks – mostly Mark Is – which often got stuck or broke down, were now big, lumbering targets.

The Allies still didn’t have any experience coordinating the activities of a large number of tanks in a battle. Instead of coordinating the movements of all of the tanks as a large group, they deployed small groups of tanks separately.

Artillery support was unable to keep up with the infantry, which became stuck behind the rear lines of the enemy.

They Germans were able to capture two Mark I tanks.

Technically, the Allies were considered to have won the Battle of Arras, as they made important territorial gains, which included the capture of Vimy Ridge. However, the Allied success in this battle did not make much of a difference to the overall course of World War I.