During the Battle of 73 Easting, well-trained American and British troops with M1A1 and Challenger 1 main battle tanks defeated Iraqis with older T-55s, T-62s and T-72s.

The First Gulf War began on January 17, 1991, when Coalition forces, led by the United States, began an air campaign against Iraq.

A ground attack on was launched on February 24. The Coalition attacked a 350 mile front in Iraq that ran from the border with Saudi Arabia northward toward Al-Tawr Al-Hammar.

The 24th Infantry Division (Mechanized) and the 3rd Armored  Cavalry Regiment of the US XVIII Airborne Corps  launched a left-hook maneuver into southern Iraq. 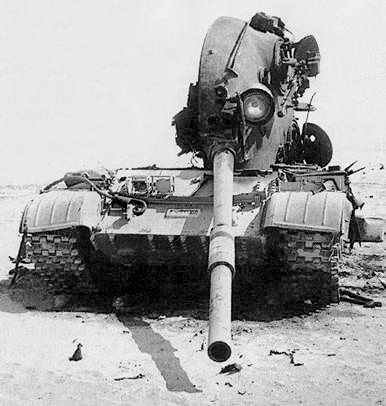 The British-American VII Corps, which was spearheaded by the US 2nd Armored Cavalry Regiment, then began moving from Saudi Arabia into Iraq, toward a sector of the Iraqi desert that was designated 73 Easting, so that they could attack Iraqi Republican Guard’s 3rd Mechanized Davison, also known as the Tawakalna Davison. The VII Corps were taxed with destroying five Republican Guard divisions near the border with Kuwait and cutting off the Iraqi retreat from Kuwait.

Towards the end of the day, on February 25, Republican Guard commanders became aware of the movement of the Coalition troops. The Tawakalna Division was ordered to take up defensive positions.

When they reached the Tawakalna Division, they discovered lined-up, dug-in Iraqi tanks.

The 1st and 3rd Armored Divisions attacked on the 26th. On that day and the next, many Iraqi tanks were destroyed. Republican commanders did not even try to launch a counterattack.

On the  night of February 25, 1991,  the 2nd Armored Cavalry Regiment came  upon the Tawakalna Division and  the 50th Division, part of Iraq’s 12th Armored Brigade.

On February 26, the 50th Division was defeated.

On February 27, VII Corps launched a coordinated attack against remnants of the Tawakalna and two other mechanized Republican Guard divisions – the 1st Armored Division (the Hammurabi) and the 2nd armored division (the Al-Medina).

The 1st Infantry Division was able to destroy 60 Iraqi tanks and 35 Iraqi AFVs.

At 73 Easting, at around 4 PM, the 2nd Armored Cavalry Division encountered Iraqi tanks of the Tawakalna Division and the 12th Armored Davison.  Equipped with thermal imaging equipment, the soldiers of the 2nd Cavalry Division destroyed every Iraqi tank they could detect.  This time, the Iraqis would not quit.  As more Iraqi tanks that were destroyed, more tanks kept coming.

Nevertheless the 2nd Armored Cavalry Division was successful. Within a little over an hour, at least 29 Iraqi tanks had been destroyed.

It is estimated that by the end of the Battle of 73 Easting, at least 600 Iraqi soldiers were killed or wounded.

Only one Coalition soldier was killed, and American and British troops suffered more casualties from friendly fire than from enemy fire.