The T-70 light tank played an important role during World War II because it was cheap and easy to mass produce.

In the 1930s, the Soviet Union purchased some British Carden-Loyd Light Amphibious Tanks from Vickers-Armstrong.

These were used as a model for a Soviet light amphibious tank that became known as the T-37. This tank was produced from 1933 until 1936, when a newer version, the T-38, was adopted. 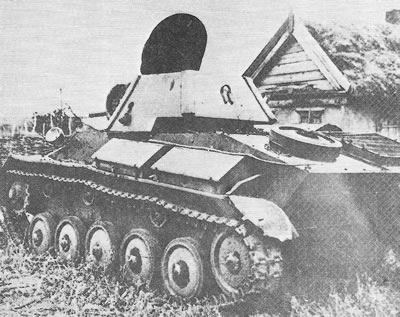 At the time, the Soviets realized that it was more important for the tank’s armor to be impenetrable than for the tank to be amphibious, so the T-60 was designed to be entirely land-based.

The T-60 was designed to scout for larger battle tanks and provide them with support. However, it did not have enough power to keep up with a T-34. In addition, its armor was very light, and its 0.79 inch (20mm) main gun was not very effective.

The T-70 light tank began appearing as a replacement for the T-60 in early 1942. It was produced at Gorki Automobile Works.

The T-70 used two of the T-60’s engines, so that the engine power was doubled.  Each engine powered a separate track.

It had thicker armor than the T-60.

While both the T-60 and the T-70 used the same chassis, the drive on the T-70 was moved from the back to the front.

The turret was on the left side of the tank and the engines were on the right side.

A crew of two men operated the T-70 light tank. There was a driver and a man in the turret who acted as commander, gunner and loader.  The turret had room for only one man.

The T-70 could only be used for reconnaissance and infantry support. Its engine system often broke down and its fuel tanks caught fire easily.

Nevertheless, it was kept in production because it could be produced easily and inexpensively.

Factories that were not capable of producing larger tanks could build T-70 light tanks.

An updated version of the T-70, the T-70A, was produced in the middle of 1943. The T-70A had heavier armor and a slightly more powerful engine.

Production of the T-70 and T-70A was discontinued in October 1943, as the Soviets decided to focus on producing more medium tanks.

A light tank based on the T-70A, which was known as the T-80, was produced at the end of 1943 but it never entered mass production.