The Germans developed a number of different tanks in response to the Soviet Union’s KV-1 and T-34, and the Soviets, in turn,  responded to these German developments by creating the JS (Joseph Stalin)-1 Heavy Tank.

The Soviets wanted the JS-1 to be a four-man tank that didn’t weigh much more than the KV-1, but had a larger gun and enough armor to repel German anti-tank gun rounds. 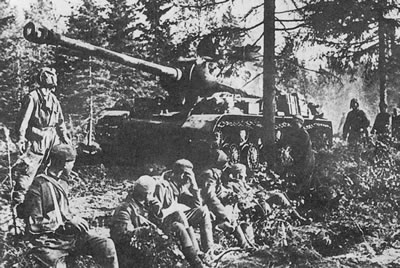 By placing a larger superstructure over a KV chassis, the Russians were able to place a larger turret ring and turret on the tank, which allowed them to fit a larger gun onto the JS-1.

The JS-1 had a low, streamlined silhouette and proved to be very reliable.

Toward the end of 1944, some of the JS-1s had their man guns changed to 4.8 inch (122mm) guns. The turrets on these tanks were replaced with larger turrets that would fit the larger guns.