The M46 Patton medium tank was an upgrade of America’s M26 Pershing heavy tank. It had a new engine, a new transmission and a new M3A1 3.54 inch (90mm) main gun with a muzzle brake and bore evacuator.

The M46 Patton medium tank weighed 43 tons (44,000kg). Although the M46 was heavier than the M26 Pershing, it was designated a medium tank because of a change in the American tank classification system after World War II. 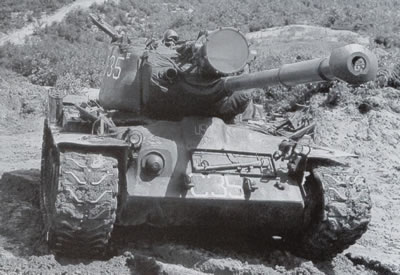 It  had a torsion bar suspension with five pairs of road wheels and five track return rollers.

A variant, the M46A1, had an upgraded engine and transmission. It also had improved fire protection, braking and cooling systems.

It saw combat in the Korean War, but in no other wars.