The Carro Armato M13/40 Medium Tank was probably used more than any other Italian tank during World War II.

It had a new high velocity 1.85 inch Ansaldo gun and three Breda machine guns instead of two.  Of the three machine guns, two were mounted on the hull and one was coaxial. Some versions had a fourth anti-aircraft gun that was mounted on top of the turret.

The M13/40 was first engaged in battle during the first North African desert campaign. It suffered from mechanical failure when it was used in the desert.  Better air and fuel filters had to be fitted in order to keep sand from getting into the machinery. 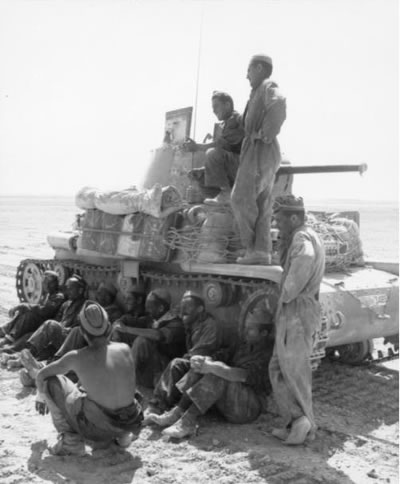 While the M13/40 had a very good gun, it was no match for Matilda  IIs, British heavy infantry tanks.

When the 10th Italian Army was defeated at Beda Fomm/Sidi Saleh, Libya, in February 1941, over one hundred M13/40s were captured.

These were still in very good condition.  The British 6th Royal Tank Regiment and the Australian 6th Cavalry took them for emergency use.