Despite the successes of smaller German tanks, as World War II progressed, Hitler wanted the Nazis to keep building bigger and bigger tanks. Consequently, the Nazis designed a series of super heavy tanks. Only two of these were ever built, the E-100 and the PzKpfw Maus (Mouse), and these two only existed as prototypes – they never went into full production.

The Maus, which was originally known as the Mammut (Mammoth) was the largest tank ever to be built during World War II.  Designed by Ferdinand Porsche, it weighed 188 tons.  Its armor was almost 8 inches thick.

Although the Maus could easily have destroyed enemy tanks, it was too difficult to maneuver and to maintain to have much practical use. It used an enormous amount of fuel and was so heavy that it couldn’t move off of level ground unaided or cross a bridge unless the bridge was reinforced. 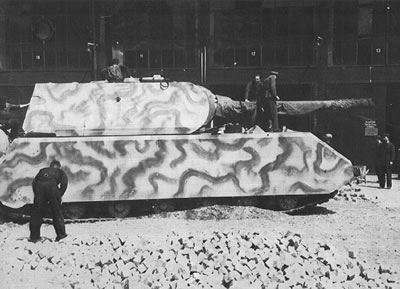 The Maus had a snorkel mechanism that allowed it be submerged to a depth of 26 feet (8 meters). This was supposed to compensate for the fact that the tank couldn’t cross bridges.

In fact, the Maus contained so much complex machinery that it would have been very hard to keep everything in good working order.

The production of both the Maus and the E-100 super heavy tanks was criticized by some as being a waste of time and effort. One critic was the Nazi’s General Heinz Guderian, who had developed the concept of blitzkrieg.