In the middle of 1943, the Germans began developing a new series of tanks called the E-series.  The E-100 Super Heavy Tank was the most advanced tank in this series.

The Germans used everything they had learned about tank warfare when they began designing the E-series, which included the E-10, the E-25, the E-50 and the E-100.

By the end of World War II, only one E-series vehicle, an experimental version of an E-100, had been built.

This prototype was discovered by Allied forces in 1945, at the Henschel tank development center.  It looked like the Tiger Model B tank, but its armor plates were heavier, it was longer and wider, it had wider tracks and it had a new suspension system.

Although a turret was never fitted onto this E-100, it was supposed to have the same Krupp turret as the Maus, as well as the same weapons. 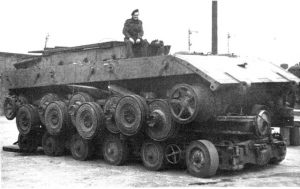 The E-100 had a suspension that was made up of overlapping steel road wheels, with MAN disc springs, that were arranged in a series. The tank had a ground pressure of almost 20psi (1.4 kg/cm2).