The A27L Cruiser Tank Mark VIII Centaur was originally designed to have a Rolls-Royce Meteor engine.  However, production shortages dictated that all of those engines that were produced had to be used in aircraft.

Therefore, the Centaur was fitted with a Liberty V12 engine.

Some A27Ls had their engines upgraded and were armed with 3.74in (95mm) howitzers. These were used by the Royal Marines during the D-Day landings, where they provided supporting fire from Landing Craft Tanks (LCTs). 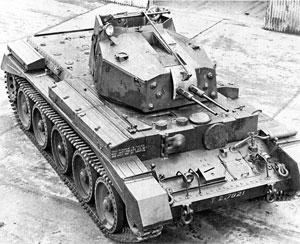 Other Centaurs (the Mark X) were retrofitted Meteor engines and upgraded to Cromwells.