The A24 Cruiser Tank Mark VII Cavalier was designed to be an improvement over the Crusader and its predecessors. The Cavalier weighed 5 tons more than the crusader and had a larger (6 pounder) gun, thicker armor, wider tracks and a better suspension than the Crusader.

However, the Cavalier used the same engine and power train as the Crusader; therefore, its larger mass led to a reduction in its top speed. 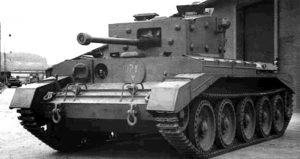 Only a small number of A24s were built, and they were never used as gun tanks.

Some had their turrets removed and were fitted with a winch and demountable A-frame jib. These were used as Armoured Recovery Vehicles (ARVs).

Others were used for artillery Observation Post (OP).  In these, a dummy barrel replaced the 6 pounder gun.