The A22 Infantry Tank Mark IV Churchill was the first British tank to be designed entirely during World War II.

It remained in production throughout the war and was one of the most popular British tanks during the war.

The Churchill had thick armor and performed well cross country, although it was slow.

It was the first British tank to mount US 2.95 inch (75 mm) guns after guns and mantlets were salvaged from Sherman tanks that were knocked out in Tunisia.

After Dunkirk, there were fewer than 100 tanks in the UK, so a consortium of companies worked together to quickly develop the tank.

Because they were built so quickly, there were many problems with the early A22s, including frequent breakdowns.

The size of this tank was limited by the loading gauge restrictions of the British railway. 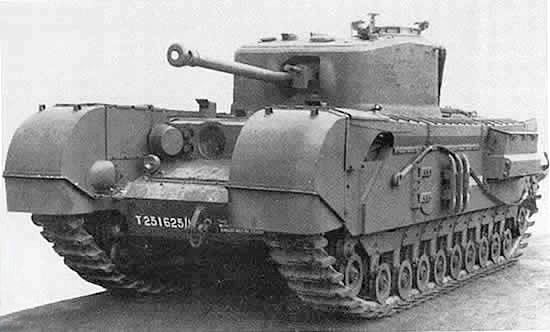 It was also too narrow to take the larger turret that was needed for the 17 pounder gun, a disadvantaged that was shared by other tanks of that time.

By 1944-45, the A22 was undergunned compared to German tanks, although its heavy armor compensated for this.

Nevertheless, the Churchill was very adaptable and was used for many different specialized roles during the 1944 invasion of Europe. These specialized tanks were known as the Funnies.  They included: