The A15 Cruiser Tank Mark VI Crusader was the primary British tank from spring 1941 until the American Sherman tank arrived.

To reduce costs and production time, as well as vehicle weight,   Nuffields used many of the components of the A13 series, including the Liberty engine and the Christie suspension.

Like the A13 series, the A15 had a welded turret, a riveted hull and an extra outer layer of armor.

The Crusader was rushed into production and, when in action, was not very reliable.

It saw action for the first time in June 1941 near Fort Capuzzo, Libya, where it performed well against Italian armor. 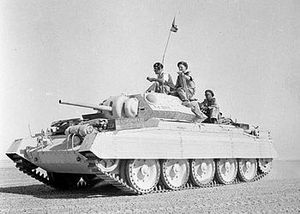 In May 1943, the Crusader was withdrawn from the front line, but it continued to be used for training afterwards.

It was also converted for a number of special uses, which included: