The A13 Mark II was the bulkier big brother of the A13, with added armor for better protection that was made from special steel plates positioned to eliminate shot traps. An example of this was the v-shaped plates added to the turret to deflect strikes, where the previous tank’s turret was a flat surface. However, some of the older A13’s were given this special turret profile before they were superseded.

The extra armor, being steel and made from hollow shapes, did not add significantly to the overall weight of the tank, so the V12 Nuffield Liberty engine performed pretty much the same as it had on the older tank, still giving a top speed of 30mph (48kph). 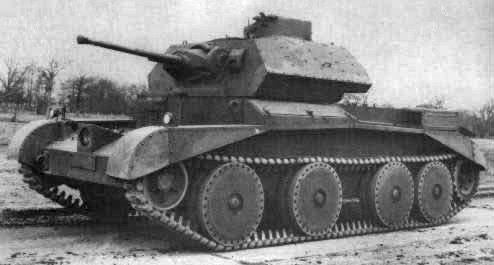 This tank wasn’t hopeless as an anti-tank weapon with its 2 pounder OQF L/52 gun, 655 of them were built in all. However, like its predecessor, it still found itself outmatched by superior German technology and high-explosive rounds.