This is the second, and perhaps more famous, tank to be named Matilda. This is a much updated version of its predecessor and far more in-line with modern, contemporary tank designs. Though, originally, the British had hoped to simply update the older version with new equipment to save money.

Thankfully, due to many shortcomings of the older tank, this was not possible and a much better machine was produced from scratch and based on the A7 Medium Tank. 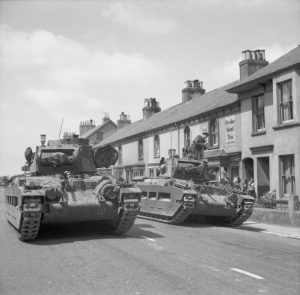 The speed of this tank was almost double that of the old version and it had a 2 pounder main gun as well as a machinegun, both mounted on the turret. The earlier version had no heavy weapon. The Mark II was built by the Vulcan Foundry in Warrington (near Liverpool), incorporating twin ganged AEC diesel engines and a Wilson epicyclic gearbox. 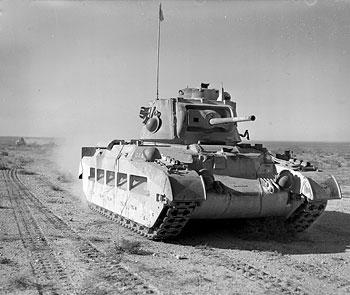 The A12 had a powered turret that could make a complete turn in 14 seconds. Unlike the A11 with its cheap riveted metal plates, the A12 had all over cast armor which is much better because it has no particular weak points. The tracks were protected at the side by one-piece armor side skirting, with five mud chutes, which made them less vulnerable to enemy rockets , panzerfausts, that were often used on tank tracks from the sides of roads of buildings. 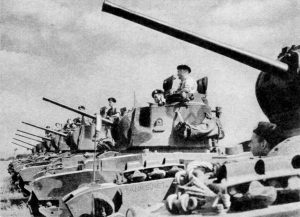 A12 Infantry Tank Mark II and, in particular, the name Matilda is most famous for its achievements in early Western Desert tank battles. Against the inferior tanks of Italy in Libya in 1940 the Matilda tanks were nigh on indestructible. The Matilda tank was the best British tank to this date and experienced its heydays during this period, up until the Germans introduced the 3.46in (8.8cm) flak gun in 1941 as an anti-tank weapon.

As the need for larger main guns arose the Matilda’s turret ring was too small to carry them so its usefulness began to wane. Still, there were a number of specially adapted Matilda tanks produced before they were replaced by subsequent technology.

The Matilda CDL (Canal Defense Light) was used to light up the battlefield at nighttime, and was also very effective at blinding the enemy.

The Baron I, II, II and IIIA’s were all flail tanks for clearing mines.

The Matilda Scorpion was also a flail tank.

The Matilda with AMRA (Anti-Mine Roller Attachment) was fitted with a heavy roller for exploding land-mines in a controlled fashion.

The Matilda with Carrot (carrot demolition charge) utilized a 600lb (272kg) high explosive to blow holes and gaps in obstacles.

The Matilda Frog was produced in Australia as a flamethrower tank.

The Matilda Murray was also a flame-tank developed in Australia.