Long before World War II began, the British realized they would need to replace their 2 pounder anti-tank gun with a more powerful weapon.

The 6 pounder took half as long to build as the 2 pounder, as the 6 pounder had a simpler design.

The ammunition for this gun was developed extensively.  An armor piercing discarding sabot (APDS) was created for the 6 pounder anti-tank gun in 1944. 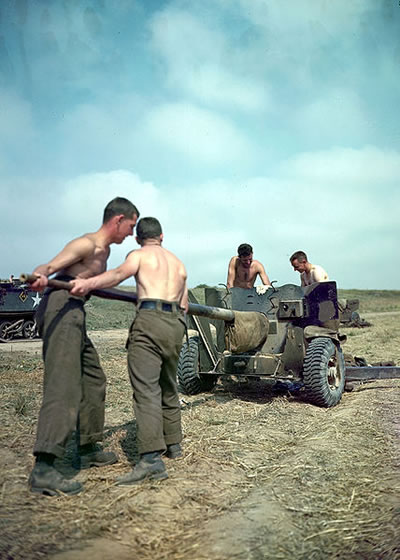 The APDS was a sub-caliber, tungsten-cored, armor piercing round that was contained in a light alloy sabot assembly that was made up of four pieces. The four pieces fell away once the round had left the barrel.

As the complete assembly was significantly lighter than a standard round, the sub-caliber round was able to achieve a muzzle velocity up to 4800ft/  (1463m/s).

The 6-pounder could also fire a high-exposive round, enabling it to be used as a general purpose weapon.

6-pounder anti-tank guns were produced in Canada and Australia, as well as in Great Britain.

By 1943, the appearance of more modern German tanks, such as the Panther and the Tiger, had made the 6-pounder less effective as an anti-tank weapon.