When it appeared in 1944, the M36 gun motor carriage had the most powerful gun in an action.  The main gun on this tank destroyer was so heavy that a new, round turret had to be built to accommodate it.

The 3.54 inch (90 millimeter) main gun was able to knock out Germany’s Tiger and Panther tanks, despite the fact these German tanks were much larger that the M36.

In August 1944, the first M36s showed up in Europe, where they were immediately used on the battlefield. 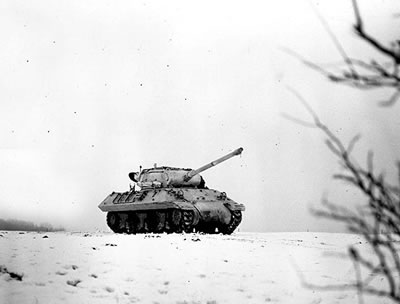 The demand for M36s increased after the campaign at Normandy revealed that the M36 was America’s best tank destroyer.  In September 1944, more than 1,500 M36 gun motor carriages arrived in Northwest Europe.