The M22 Locust light tank was designed in the United States by the American engineer Walter Christie.   Although it was an American-made tank, the Locust was never used by American forces.  It was shipped to Britain as part of the Lend-Lease program and used by the British during World War II.

M22s were issued to Britain’s 6th Airborne Armoured Reconnaissance Division, who used them along with the Tetrarch, a British light tank. 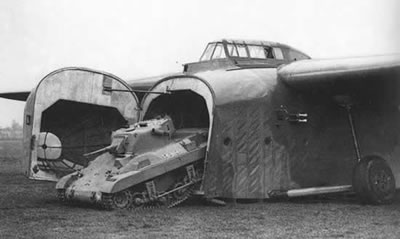 Both the Tetrarch and the Locust were carried in British Hamilcar gliders, and both of these tanks were used during the March 1945 Rhine crossing.

The M22 was too light to be very effective in battle.