In the 1990s, China began working on an improved version of the Type 90 main battle tank, which was developed as part of a joint project with Pakistan to create a tank that would be produced in Pakistan.  (This project resulted in the creation of Pakistan’s Al Khalid main battle tank .)

The Type 98 main battle tank entered service in 1988 and was first seen in public during the 1999 National Day Parade. 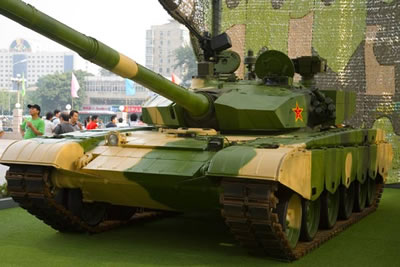 Unlike the Type 90 MBT, the Type 98 did not have an autoloader, as was common in Chinese and Russian tanks. This mean that the Type 98 man battle tank had a four man,  rather than a three man crew – the four man crew consisting of driver, commander,  gunner and loader.

An autoloader was added to an upgraded variant, the Type 98G, bringing the crew size back down to three. The Type 98G was also given a better fire control system, better armor, and a more powerful engine.

The hull of the Type 99 main battle tank resembles that of Russia’s T-72.  However, the angular turret is of western design.

Both the turret and hull of the Type 99 MBT are made of all-welded steel.

While the Type 98G main battle tank has a 1200 horsepower diesel engine, a 1500 hp engine powers the Type 99. This new engine is believed to be based on German technology.

Explosive reactive armor modules on the front of the hull and on the turret provide the Type 99 main battle tank with additional protection.

The Type 99 MBT has a torsion bar suspension.

Main armament on the Type 99 MBT is a ZPT98 4.92 inch (125mm) smoothbore gun with a thermal sleeve and fume extractor. The main gun can fire a Russian AT-11 Sniper laser guided missile (also known as the 9M119 Refleks laser guided missile – AT-11 Sniper is the NATO reporting name). This missile is produced under license in China. The gun can also fire HEAT, HE-FRAG and APFSDS rounds.

Because the Type 99 main battle tank is very expensive to produce, not very many of these tanks have been built.