The Altay MBT will be Turkey’s first indigenous main battle tank. In 2005, Defense Industries of Turkey (SSM) launched the Altay National Tank Project. Otokar was chosen as the main contractor in 2008, and development of the MBT began in 2009. Otokar is working alongside South Korea’s Hyundai Rotem and its subcontractors Aselsan, MKEK and Roketstan.

The Altay is named after General Fahrettin Altay, commander of the V Cavalry Corps during Turkey’s War of Independence.

A 3D image of the tank was made publicly available in 2010, and a full scale mockup was revealed in 2011 at IDEF 11, Turkey’s International Defense Industry Fair. 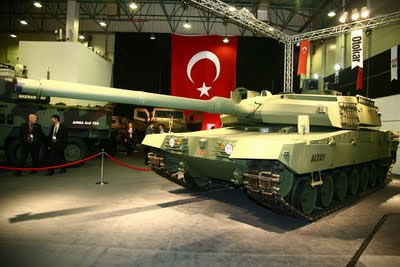 The Altay has seven tracked wheels and a hydropneumatic suspension. The fighting compartment is in the middle, and the power pack is in the back.

The Altay is expected to use technology systems developed by Hyundai Rotem for South Korea’s K2 Black Panther MBT.

Roketsan is developing modular reactive composite armor, which will protect against biological, chemical and radiological attacks. MKEK is developing the main gun system, and Aselsan is developing an active protection system and an advanced Volkan-III fire control system.

Turkey is planning to manufacture four batches of 250 tanks each, for use by the Turkish Land Forces Command (TLFC).