The Al Khalid main battle tank is the result of a joint venture between China and Pakistan. It is in service with the Pakistani Army.

In 1990, China and Pakistan signed an agreement saying that China would help Pakistan to develop a new main battle tank, which eventually would be produced in Pakistan. 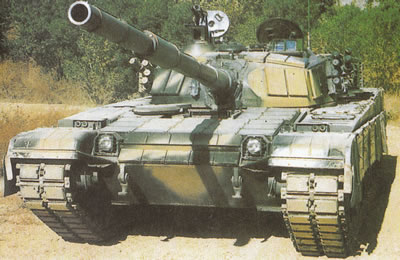 Development of this new tank took place in four stages:

The first prototype of the Type 90 II main battle tank was built in China in 1991.

China did not adopt the Type 90 II MBT for its own army.  Instead, it decided to export it. The export version of the tank became known as the MBT 2000. It was displayed at the Abu Dhabi Defense Expo in March 2001.

The MBT 2000 was never sold to any foreign countries. It is no longer in production in China.

In 2000, Pakistan began producing its own version of the MBT 2000, which it called the Al Khalid.

The Al Khalid main battle tank entered service with the Pakistani Army in 2001.

It is covered in all welded steel armor, with an additional layer of composite armor over the frontal arc.  Armor is modular, for easy replacement.

Explosive reactive armor can be fitted to the tank.

The Al Khalid main battle tank has a torsion bar suspension, with six road wheels on each side of the tank. The drive sprocket is in the rear and the idler is in the front.  A skirt covers the track return rollers.

The primary weapon on the Al Khalid main battle is a 4.92 inch (125mm) chrome plated smoothbore gun.  The gun can fire HEAT, HE-FRAG and APFSDS rounds. It can also fire a laser guided missile with a HEAT warhead.

There is an automatic loader on the tank.

Because the MBT 2000 Al Khalid has an automatic loader, the tank requires a crew of only three men- driver, commander and gunner.

There is an NBC system, night vision equipment, a laser rangefinder and a computerized fire control system.