Japan’s Type 90 Main Battle Tank is the main battle tank of the Japanese Ground Self Defense Force (JGSDF). It was a replacement for the Type 74 MBT.  Although the Type 90 main battle tank and all of its components, except for the main gun, were designed entirely in Japan, the tank bears similarities to America’s M1 Abrams and Germany’s Leopard 2.

The first prototypes of the Type 90 MBT were completed in the 1980s, and the first production vehicles were built in 1992.

The Type 90 main battle tank has six pairs of road wheels. There is a hybrid suspension.  The center wheels have torsion bars and the first two and last two wheels have hydropneumatic units. The idler is in the front and the drive sprocket is in the rear. Skirts cover the upper part of the suspension.

Steel and ceramic composite armor covers the front of the hull and turret.

Main armament on the Type 90 main battle tank is a German Rheinmetall L44  4.72 inch (120mm) smoothbore gun that is produced in Japan under license. The gun can fire HEAT-MP and APFSDS-T rounds. 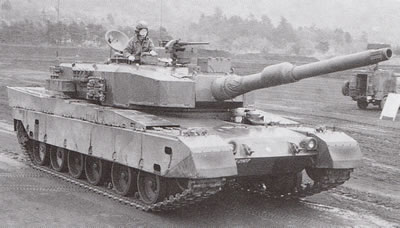 A computerized fire control system allows the main gun to be fired accurately when the tank is stationary and when it is moving.

The main gun has an automatic loader.

Except for the main gun, the rest of the tank and all of its subsystems were designed in Japan.

The powerpack is in the back of the tank.

There is a laser rangefinder, an NBC system and passive night vision equipment.

Attachment points for a bulldozer blade are on the font hull.

Variants of the Type 90 main battle tank include an armored recovery vehicle, a bridgelayer and a mine clearer.

The JGSDF is planning to replace the Type 90 with a new tank, the Type 10 main battle tank.