China’s Type 85 main battle tank was designed to be an upgraded version of the Type 80 MBT.

Type 85-I  never got past the prototype stage. However, the next variant, Type 85-II, was able to enter production successfully.  It was introduced in 1991.

The hull and turret on the Type 85-II MBT are made of welded steel.  There is an extra layer of composite armor on the glacis plate and on the front and sides of the turret.

Six road wheels are on each side of the tank. The idler is at the front and the drive sprocket is in the rear.  The upper part of the suspension is covered by a skirt.

The main weapon on the Type 85-II main battle tank is a fully stabilized 4.92 inch (125mm) smoothbore gun, which can be elevated from -6 degrees to +14 degrees. 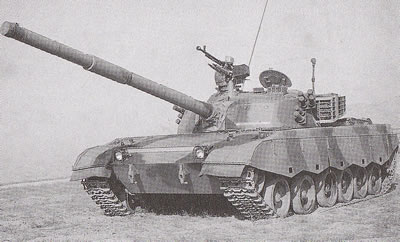 The type 85-II main battle tank has an automatic loader, reducing the crew from four to three – driver, commander and gunner.

An advanced computerized fire control system that has a laser rangefinder allows the gunner to engage moving targets while the tank itself is moving.

Type 85-IIAP  is  a variant that is built in Pakistan under license.

The Type 85-III main battle tank, a variant which first appeared in 1997, has a more powerful 1000hp diesel engine, a new transmission, and explosive reactive armor on the turret and the front of the hull.