The T-90 main battle tank was under development during the time of the collapse of the Soviet Union.

In 1988, the first prototype was completed.  In 1992, the T-90 entered service with the army of the newly formed Russian Federation.

However, the T-90 main battle tank uses some of the T-80’s subsystems, including the T-80’s fire control system, its explosive reactive armor and its Shtora-1 active protection system, which jams laser rangefinders and laser designators.

The T-90 main battle tank is protected by composite armor made of steel, aluminum and plastic. 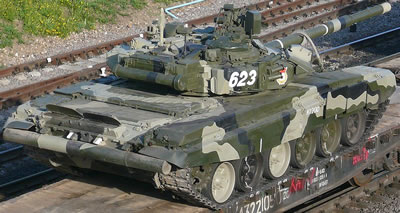 The front of the hull and the front sides of the turret are covered with Kontakt-5 explosive reactive armor, which was first used on the T-80U main battle tank.  Kontakt-5 ERA protects against HEAT rounds and APFSDS-T rounds.

The T-90 main battle tank has a torsion bar suspension with six pairs of road wheels.  The idler is in the front and the drive sprocket is in the back. The upper part of the suspension is covered by a skirt. There are additional large square armor panels on the front of the skirt

Primary armament on the T-90 main battle tank is a 4.92 inch (125mm) smoothbore gun that can fire guided missiles as well as HE-FRAG (FS), HEAT-FS and APFSD-T rounds.

There is an automatic loader.

The turret has 360 degree traverse, and the gun can be elevated from -6 to +14 degrees.

The T-90 MBT can lay a smoke screen by injecting diesel fuel into an exhaust outlet on the left side of the hull towards the back.

A three man crew – driver, commander and gunner – operates the T-90 main battle tank.  There is no need for a loader, as the tank has an automatic loader. The driver sits in the front center of the hull.  His seat is attached to the roof rather than the floor of the hull. This makes it more likely that he will survive an anti-tank mine explosion.

All of the crewmembers have night vision equipment.

There is an NBC system.

The T-90 main battle tank was used during the 1999 Chechen invasion of Dagestan.

It has been exported to India.