The T-84 main battle tank has explosive reactive armor on the front of the hull and the front and sides of the turret.

The T-84 has night vision equipment and NBC protection. 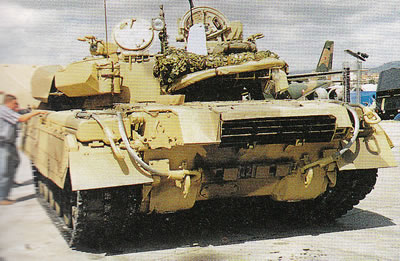 There are six road wheels on each side of the tank. The idler is in the front and the drive sprocket is in the rear.  A skirt covers the upper part of the torsion bar suspension.  There is additional armor on the front of the skirt.

Main armament on the T-84 main battle tank is a 4.92 inch (125mm) smoothbore main gun that was designed in the Ukraine.  The gun an be elevated from -5 to +13 degrees and  can fire a laser-guided missile as well as HE-FRAG (FS), HEAT-FS and APFSDS-T rounds.

Secondary armament includes a 0.3 inch (7.62 mm) coaxial machine gun and a 0.5 inch (12.7mm) anti-aircraft machine gun, which is mounted on the right side of the turret roof. There are six pairs of smoke grenade launchers.

There is an automatic loader, so a human loader is not needed.

The commander operates the anti-aircraft gun

An armored recovered vehicle that uses the chassis of the T-84 MBT has been designated the BREM-84.

The T-84 main battle tank is used by Ukraine and Pakistan.