Twardy is Polish for “hard” or “resilient”.

A type of explosive reactive armor, known as Erawa, which was developed in Poland, is fitted to the front of the hull and the front and sides of the turret.  Erawa consist of layers of explosives that are sandwiched between steel plates. 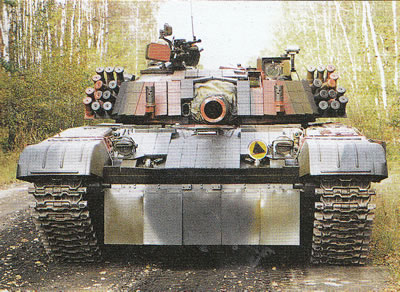 There are six road wheels and three track return rollers on each side of the tank.  The idler is in the front and the drive sprocket is int herear.  A skirt with explosive reactive armor covers the upper part of the suspension.

Main armament consists of a 4.92 inch (125mm) smoothbore gun with a thermal sleeve and fume extractor.   The gun can be elevated from -6 to +13 degrees.

The turret has 360 degree traverse.

The PT-91 Twardy MBT has been exported to Malaysia.